Yesterday in the afternoon I picked up some clothes to get them to the laundry; by the way, in Iraq we do most of our laundry at home except for suits, jackets or clothes that have a stubborn spot of oil or juice or…whatever! That's not what I should be talking about right now.
So, the place I was going to to do the laundry is very close to a mosque (a Sunni mosque to be more specific), now once I parked the car and made the first two steps to my destination I was attacked by a kid holding a parcel of flyers in one hand and handing out flyers to pedestrians and people in cars with the other hand.
The parcel was heavy for him that he barely kept balance while moving and it looked funny.

"Uncle, here, take these, read them and then go register your name in the office" said the kid while he snatched a couple of flyers from the parcel (which you can see in the image below) and handed them over to me.
The word "uncle" or "aunt" is used so often when talking to anyone relatively older in age…well, again that's not our topic today!

That kid was not alone there; there were other kids doing the same, all wearing the same kind of screen printed t-shirts and caps carrying the name and sign of the Islamic Party. 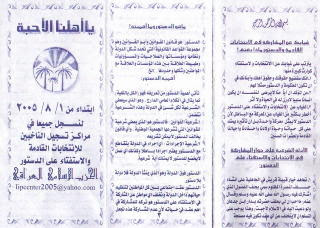 Those flyers are different from the ones that were distributed prior to the January elections by this party and other Sunni entities; this time they're encouraging their fellow Sunnis to take part in the referendum and the next elections describing the people's commitment to the constitutional process as a "must do" social and patriotic duty and describing the party's campaign to encourage joining the process as a "must do" religious duty.

It's interesting that this time they were digging for proofs in the Quran and Hadith (sayings of the prophet) to support and justify their calls for taking part in the referendum and elections. They even chose a Hadith where the prophet is supposed to have legalized having a social contract with "nonbelievers" if that contract is going to serve the interests of the community and that's in my opinion is a huge change.


It seems that everyone is getting ready to say their word the on constitution and all that is missing now is, er...the constitution!
Posted by Omar at 12:22

You have a very good blog that the main thing a lot of interesting and useful! erectile dysfunction Read a useful article about tramadol tramadol