And the protests for a civil constitution continue...

This was the headline in the announcement that called for today's women protest in Baghdad.

In spite of the heat and the dust that's covering Baghdad for the 2nd day, more than a hundred Iraqi women representing NGOs and active groups gathered to declare their demands in equality and a civil family and personal affairs law.
The women set a large tent in Al-Firdows square which witnessed the fall of Saddam in April 2003. Under this icon of freedom the women held their signs and demands high. 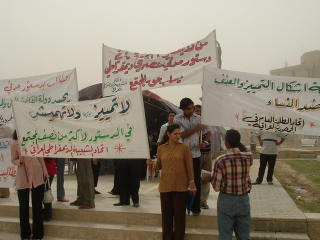 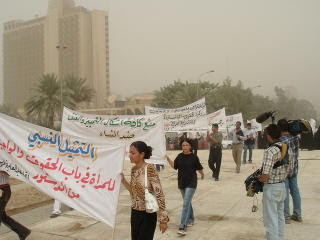 I met some of the activists who talked enthusiastically about plans for more protests and conventions to show their disapproval of the constitution's draft because they're afraid that religion might hijack the constitution and deprive them of their rights.
I've also noticed that signs that required two to hold were held by a male and a female in a sign of equality; I liked the idea! 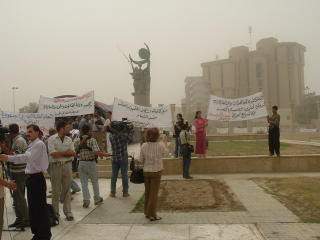 We were talking and discussing related issues when a black cloud began moving toward the square. 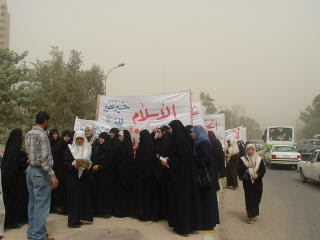 Our protestors' faces changed and a feeling of discomfort started to spread through the place, one woman said "NO! Not again!!".
That cloud was actually a group of 30 veiled women carrying signs saying things like "Yes, Yes to Islam and NO to Western Secularism".

One of the women yelled at the cloud "No, you can't steal the attention this time. Why do you always do this to us every time we have a protest? Why don't you pick another place or another day to do your thing?".

I tried to calm her down and I told her that the other group has the right to demonstrate just like you do. She said " Yes, but look at the media, they will report about the event as if at was a pro-Islamic demonstration while our voices will be ignored. These women's movement isn't genuine, they keep waiting till we gather and then they show up and they don't do a demonstration of their own and all they do is to oppose what we say". And as the women expected, the media ran to cover the black demonstration. 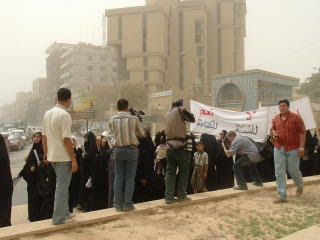 The police stood between the two teams to prevent any conflict but one Islamist women yelled "No to immorality and dissolution".

At this moment our demonstrators were so angry because of this accusation and a fight with words took place, the organizer of the original protest shouted at the black cloud saying "you want to drag us back to the dark ages, we are neither immoral nor dissolute but your way of thinking is backward". 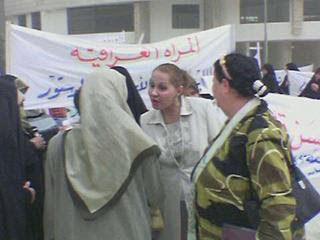 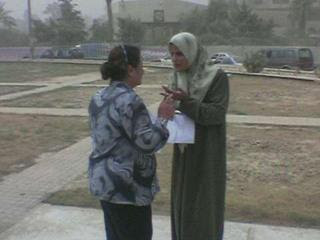 The tension between the two groups increased and the policemen stopped the Islamists from approaching the liberals' tent.
I seized the chance to talk to the leader of the black cloud:

Me: You want an Islamic state?
Her: Yes I do.
Me: Okay but which version of Islam you want? For example will you accept a Sunni interpretation of Sharea to replace the civil law?
Her: No, the Islam I want is the one that most Muslims agree with.
Me: Fine but different factions have different opinions in almost everything.
Her: Then we shall put a judge from each faction in the courts.
Me: But this way we'll be empowering sectarianism!
Her: No, this way we'll be empowering freedom of religion.
Me: You are a physician as I understood and according to the 137 law your testimony in a court of law will equal half that of any man even if he was illiterate. Will you accept that?
Her: It's an honor to me to be half of a garbage collector because that's what Allah said and it's not you who can explain to me what Allah said.

The journalists and other women were shocked by her answer and they left her as they knew there was no space for a rational talk with her.

Here one of the women from the liberal camp said to her colleagues "don't pay them attention, such women get beaten if they return late to their husbands but we can stay as long as we like because our husbands trust us. They will leave in no more than an hour; such women are slaves of their homes and husbands but we are staying here to defend our rights and their rights because their minds are too weak to do that".

Now I will leave with more photos: 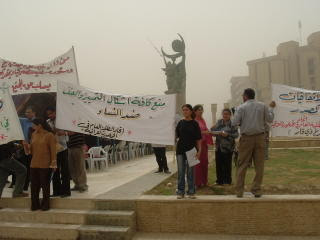 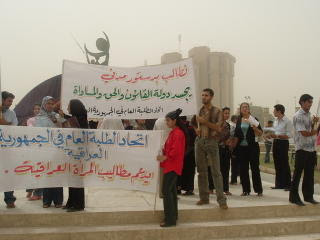 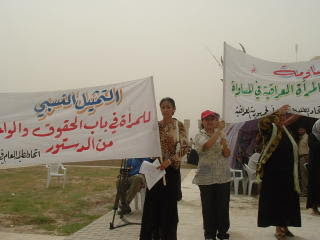 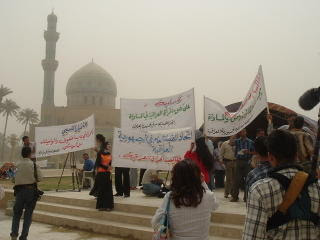 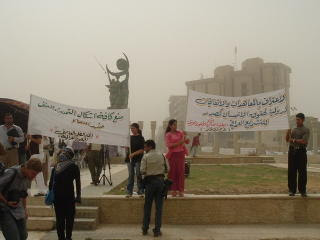