National Assembly member Bahaa Al-Aaraji just told Al-Iraqia TV that an agreement has finally been reached among the leaders of political bodies on the final draft of the constitution and that disputes over issues like federalism, distribution of resources and the role of Islam have been solved.

"All we need now is a couple of hours to reprint the document and produce enough copies to submit them to all the members of the National Assembly to get theri approval later this evening…" Al-Aaraji explained.

Till now there has been no announcement from the head of the constitution drafting committee but Al-Iraqia reporter in the green zone is confirming the news.

Update (6:45 pm local time)The Sunni member of the constitution drafting committee Hasan Zaidan (1st image) said that he didn't get to see the new document till now and added: 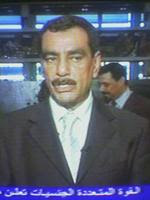 "It seems that the Kurds and the Sheat want to pass this draft without considering our opinion...There are other unsolved points till now and I have no idea why no one notified us of the results of the latest negotiations".

Mean while, another CDC member Ali Al-Dabbagh (2nd image) confirmed the news of the agreements and he insisted that this outcome was reached with lots of dialogue among the concerned parties. 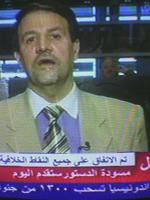 Update (7:10 pm local time):
In a press conference that just ended in Baghdad, Jawad Al-Maliki and Jalal Addin Al-Saghir (CDC members from the United Alliance) said that the Sunni politicians still have reservations on federalism but they expected that the draft will easily get the approval of 2rds of the Assembly members.

"Frankly speaking, we cannot wait for the Sunni forever; we have a deadline to respect and if they don't agree with what was written in the draft they can say that in the referendum but we're still having talks with the Sunni politicians" said Jalal Addin (3rd image). 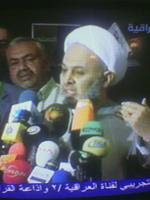 Regarding Islam and the constitution: it was agreed upon that no laws that are against the widely agreed upon values of Islam can be issued and no laws that are against the values of democracy and human rights can be issued.
Natural resources according to the draft will be managed in cooperation between the central government and the local administrations of the federal states/provinces.

Chairman of the National Assembly Hachim Al-Hasani announced that discussions are still underway among all involved parties in hope for reaching "accord" before disclosing the draft; this is expected to be done within an hour and then the Assembly shall start a session to approve the draft immediately after that.
This is of course in effort to convince the Sunnis to be part of the process, however if this last discussion fails the Sheat and Kurdish blocks are most likely to present the draft without the "OK" from the Sunni politicians.

Meanwhile there have been rallies of joy and celebrations in many Iraqi cities mainly in the south and people went to the streets in thousands although it's past 10 pm now. 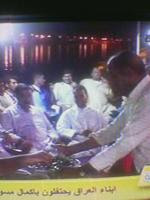 The Iraqi TV has been playing patriotic songs all the evening and in between the incoming reports and updates; one song named "Good bye sadness" was played more than 20 times so far!!

The Assembly has assembled! Voting will follow so stay tuned! 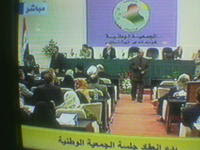 PM Dr. Jafari and president Talbani join the session and the Assembly members are receiving their copies of the draft.

"The Assembly has received the draft from the CDC but becaue there is a number of issues that still need further discussio and in accordance with clause 61-f of the TAL, voting will be postponed for another 3 days until the leaders of political blocks can reach accord on the few remaining disputed issues" said Hachim Al-Hasani chairman of the Assembly.

Apparently they think that it is in the best of the process to have accord among all the political blocks.