A group of 35 Iraqi sergeants graduated from a training course in the UK on Wednesday: 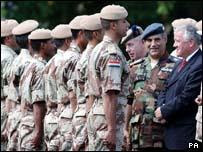 The 35 graduates who received intensive training for 3 months from British trainers showed their new learned military skills as they paraded in the Infantry training facility in Wales.

The new sergeants were trained according to the same curriculum that is adopted in the British army after introducing a few modifications to meet the special requirements for operating in Iraq; the main job of these men when they return to Iraq will be training new Iraqi soldiers. 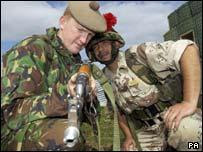 From the Arabic BBC news page.

The graduation ceremony was attended by UK's defense minister who talked to the graduates saying "I see brave men in you and there's a tough task awaiting you so be careful and take good care of your country".

Iraq's army deputy chief of staff General Naseer Al-Ibadi who was also there said "We're looking forward to seeing the day when two units from our countries can work side by side in far away places to fight for and defend peace" and added "training our soldiers in the UK is the start for introducing the right ethical values and the concepts of human rights into the Iraqi army".

This is the type of commanders I admire; the cruelty of the difficult situation in Iraq didn't stop him from looking forward to the future.
Posted by Mohammed at 13:39