Nouri Al-Maliki and Ayad Allawi are going to meet tonight at 6pm local time, at Allawi's Iraqiya bloc offices.
Word in some local media and speculations by some politicians indicate that a deal between the two leaders is imminent. The deal is expected to give Allawi the Presidency and Maliki the Premiership, while awarding the Parliament Speaker post to the Kurds, who are freaked out by the rumors.
Posted by Omar at 10:05 14 comments: 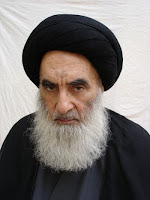 A growing sex scandal that recently surfaced is probably going to haunt the Najaf clergy, particularly that of Ayatollah Ali Sistani, for a while. Recently, a bunch of video clips appeared on youtube, in which Sistani's representative in Maysan province is seen engaged in sexual action with several women.

So far, the leaks, discussion and speculations have been limited to online forums and blogs, so I must point out that other than I cannot guarantee the accuracy of the additional details...All I can say with certainty though is that the videos of the playboy cleric do exist.

So, reportedly, this guy, Manaf Il-Naji ( مناف الناجي Sistani's representative in Amara-Maysan, who leads prayers and collects the religious tax for Najaf) had seduced or drugged over a dozen different women; some of whom married, and recorded the intimate engagements, supposedly, to blackmail the women and ensure they continue to obey his orders. It is strange though that one of the women is said to be a "colleague" of Il-Naji and the head of a religious women organization that answers to the same hierarchy. The memory card or the camera got lost or stolen and someone posted the videos on the internet...BOOM!

Word reached the families and tribes of the women and, reportedly, some "honor" murders took place and the tribes are demanding Il-Naji's head.

Clerics' involvement in crimes of sexual exploitation is not news, they do it all over the world all the time, often abusing their status and authority in the process of perpetuating and hiding their atrocities. The phenomenon/crimes turn into disasters when the establishment (Sunni, Shiite, Catholic, whatever) rushes to defend the sexual predators and cover up their crime, and it looks like Sistani's establishment is no exception.

Word in the forums and blogs is that Sistani dispatched Ahmed Al-Ansari, one of his assistants on a mission to calm the tribes down, call for restraint and contain the scandal. Ansari was supposedly armed with lots of cash to bribe/persuade sheiks and needy families alike. Other people claim that Il-Naji is currently hiding in or around Sistani's office in Najaf, while others are speculating that he fled to Iran. Some websites posted excerpts of an alleged letter from Sistani to the tribes asking them to "protect the faith by accepting reconciliation and turning the page on what happened...a scandal would forever be a stigma in the history of our faith and would allow Ba'athists and Takfiris to smear and insult the leaders and symbols of the faith."

If true, the letter shows that in Najaf, as in pretty much any other religious establishment, image, influence and power come first. The poor bastards on whose shoulders this power and prestige are built can go to hell.

I have so far seen no mention of this story in any local newspapers, TV or any other traditional media sources, but the videos exist, so we know it's there. My guess is that editors and managers have deliberately chosen to ignore the news because they don't want to face the consequences of messing with the untouchables, which are certain to be very serious.
Posted by Omar at 20:05 17 comments:

Time for some maintenance

I decided it was time to finally endorse Blogger's new (a couple years old actually!) goodies and fancy tools. So, I will be upgrading, adding, removing, adjusting and readjusting page elements, sidebar content, links etc one thing at a time, meaning it will probably take a couple weeks until things return to normal. The disruption will regrettably involve the comments section as well, but I will try to fix this asap.

The comments section was restored faster than expected, which is great, especially that if we lose it we lose almost 7 years worth of your comments, which would be a shame.

The best thing about this maintenance work is that hopefully display problems will be solved and people who used to see a blank space when loading the page will start to see the blog posts where they should be.
In fact, the upgrade is more than 70% complete!...Some work on the blogroll and links and we will be done.

By the way, your feedback and suggestions would be highly appreciated.
Posted by Omar at 18:41 3 comments: