Protests and clashes in Samawa. 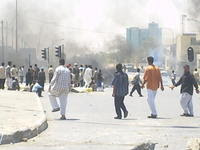 This morning Samawa city witnessed widespread clashes between the residents of the city and the police forces after the people answered the call of the "independent people's parliament" to shut down streets and stores and protest an front of the town hall of the city until their demands are answered.

These demands were announced in a document distributed by the "independent people's parliament" and they included:

1-Preventing a known group of thugs from messing with order and peace in the city. This group is trying to drag our peaceful town to needless conflicts that can only destroy our city.

This is an obvious reference to the religious militias that are trying to control the city.

2-Improving the basic services provided by the municipality after they deteriorated drastically in the last few months and putting an end to corruption in the local administration that has reached unprecedented levels.

The police forces responded by opening fire on the demonstrators killing at least one and wounding 46.

The people of Samawa-by creating this parliament-are expressing their contempt and rejection to the current city council that had let them down.
I recall a friend from Samawa telling me once and complaining about the city council "When we voted for the oppressed who suffered from Saddam's regime, we expected them to understand our situation and suffering but unfortunately it seems that we were wrong".

It really hurts me to see Samawa (the city I lived in for a whole year) in this bad situation but at the same time I'm sure that the good and friendly people of Samawa will never accept injustice again.
Today's protests (in spite of the tragic losses) showed us again what kind of spirit our people have and proved again that they're going to find their way to a better future.

Those who tasted freedom once will never accept to live under despotism and injustice again.
What's been happening in Najaf, Kerbala, Nasiriyah and Basra during the last month and what happened today in Samawa is going to show the government that the people will not remain silent anymore.
The government has to correct its path as fast as possible and fulfill its commitments to the people who risked their lives to elect those who formed the government.
Otherwise, I think lots of faces will change after the next elections.
More photos from Al-Dhafir's blog.
Posted by Mohammed at 08:22

Pretty! This was an incredibly wonderful article.

Thank you for supplying this info.

What's up to all, it's genuinely a nice for me
to go to see this site, it includes useful Information.

Greetings! Very helpful advice within this post! It's the little changes which will make the greatest changes. Thanks a lot for sharing!

Wonderful blog! I found it while surfing around on Yahoo
News. Do you have any tips on how to get listed in Yahoo News?
I've been trying for a while but I never seem to get there! Thank you

Your style is so unique in comparison to other folks I've read stuff from. Thank you for posting when you've got
the opportunity, Guess I'll just book mark this site.

Look into my blog: www.maidbrigade.com