Baghdad's Stadium is back to life.

The Iraqi premiere soccer league was launched the day before yesterday in Baghdad under high security precautions.
People who have been there told me that Iraqi police and army as well as American forces patrolled the area to make sure that no terrorists would be able to perform any attack.
The 1st match between Al-Zawra and Al-Shurta (police) soccer clubs was the 1st match to be held in Iraq's only international stadium; Al-Sha'ab Stadium (which means the people's stadium) since 2003.

The stadium which was opened for the 1st time back in 1966 suffered from neglect and lack of maintenance in the past decades and then was shut down in 2003 as the area was used for military purposes by coalition troops.

In late 2003 or early 2004 a campaign to rehabilitate the stadium started and troops left the area. Although work on this project was completed months ago, the stadium hasn't been opened due to the security situation which makes a stadium full of people a favorable target for terror attacks.

But obviously, the current relatively calm situation in Baghdad encouraged the authorities and the soccer clubs to resume holding matches in this stadium and I really admire the thousands of spectators who came to the stadium hours before the match started and defied all fears and threats and cheered their favorite teams in a festival of sport, joy and hope. 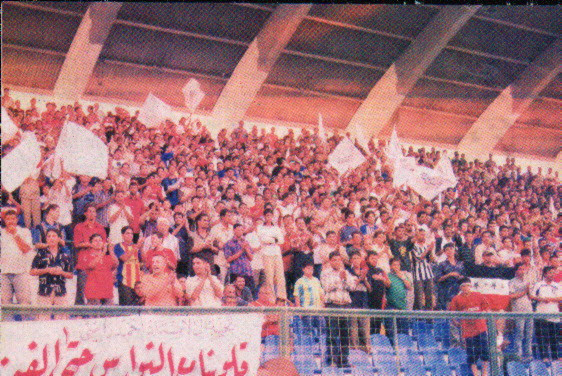 Photo scanned from today's Al-Sabah.
Posted by Omar at 08:03

I will be your frequent visitor, that's for sure. pain relief