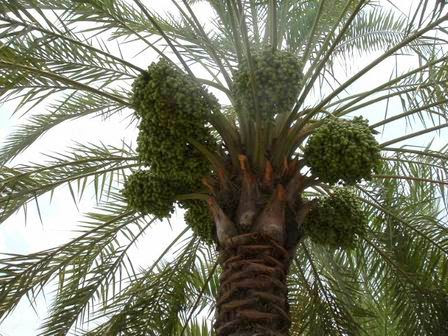 The date palm remains as one of the most important symbols of Iraq and a tree that is very dear to her people, one that fed them for thousands of years till it became holy in many aspects and there’s an Iraqi saying that goes “a house with a date palm will never starve” and there’s a date palm in almost every house in Iraq except in the far north.
We were the 1st country in the world when it comes to the number of date palms and their quality, as Iraq had more than 30 million date palm in the 70s of the past century. Those orchards of palms maybe the most beautiful scene one can see in Iraq and there are almost 400 types of these palms many of which are considered the best in the world.
The date palm starts to conceive after 5-10 years of planting it and this depends on the type of the tree and the nature of the soil and it can carry 5-12 clusters. A good tree can carry up to 100kg of dates. The dates start to mature in the middle of July and can be reaped totally near the end of September.
The date is considered as a fruit and food and you can get many products from it such as vinegar, arak (the most famous local alcoholic drink in Iraq) and date honey (dibis) and the leaves of the palm has always been used in building cottages and furniture in the urban areas of Iraq.
Generally there’s a strong bond between Iraqis and date palms and there’s a saying that is believed to be one of Mohammed the prophet sayings that mention the date palm as being created from what was left of the ashes that Adam was created from, and the date palm was mentioned several times in the Koran.
Like most of living souls in Iraq, the palm was not spared from Saddam’s destructive nature, and as a result of the successive wars and the erasing of palm orchards by Saddam in the areas he believed was against him or was used by his opponents Iraq is left with only half of the original number of palms.
Today there’s a large campaign to bring Iraq back to its special position regarding the date palms and there’s also a plan prepared by the ministry of agriculture to plant thousands of these trees that are considered a beautiful Iraqi icon. The current season promises good outcome and we all hope that one day, the Iraqi desert will be full of this Iraqi symbol.

I really liked your article. cardiovascular