Today, Mohammed and I had the privilege to be invited to attend a conference organized by a group of civil society organizations to announce the launch of a new community under the name “Ahd Al-Iraq” or (the oath of Iraq). 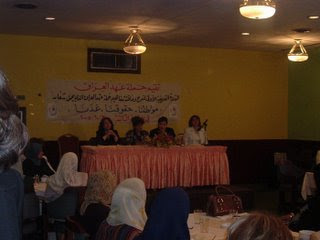 The basic theme of the community is to take a promise from politicians, civil society activists and MPs (current or running for office) to preserve and protect the rights and freedoms every Iraqi citizen is supposed to enjoy under the new constitution and under the internationally recognized conventions and laws and to work to introduce amendments in the constitution whenever believed necessary for the protection of these rights and freedoms.
The founders of the community named five main points in the constitution that require urgent reconsideration:

1-Several articles in the constitution mention “public order and ethics” as limits to freedoms granted to the population.
The suggestion: These concepts must be defined by the judiciary and must not be left loose for whomever (clerics, executive authority, etc) to interpret as they like.

2-The personal affairs law:
The suggestion: to return back to the civil law legislated back in 1959 and to prevent Shareat laws from replacing that law.

3-The supreme/higher federal court in the constitution has to be formed from law experts and Shareat experts, number and nominations are to be decided by 2 thirds of the parliament members.
The suggestions:
a)All court members have to carry high degrees in law and first line judges.
b)Shareat experts must not outnumber law experts.
c)Women must be represented inside the court with no less than 25%.

4 & 5- Both related to the role of the higher human rights committee:
Suggestions:
Several but the most important one is to allow the committee to a) review legislations and laws to ensure they do not violate the universal declaration of human rights b)verify the constitutionality of legislations.

This committee is founded by a group of well known Iraqi women activists including some who occupy important positions in the government namely, Dr. Azhar Al-Sheikhly the minister of women affairs, Iraq’s ambassador to Egypt Saiyah Al-Suhail Dr. Pascal Eisho, the minister of immigrants and displaced, Dr. Narmeen Othman the minister of environment and social affairs and Dr. Rand Raheem Iraq’s envoy to the US and founder of the ‘Iraqi Institute’ and others. However, these women didn’t participate as ministers but rather as individual Iraqi women working together to gather support for the cause of the community. 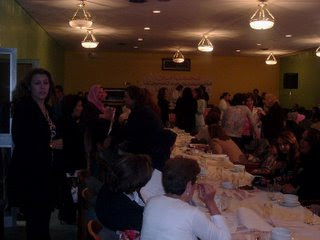 The event was attended by more than a few female Assembly members as well as several tribal sheiks and representatives of other political entities and organizations…one can fairly say that a wide range of social and political the spectrum of Iraq population was well represented in the event. 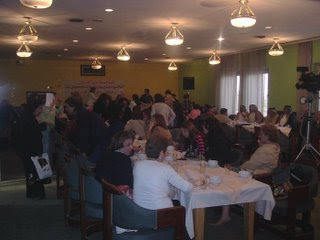 The general sense was that the constitution had to be supported to be passed but now, hard work and serious steps have to be taken to introduce the needed amendments to build the civil society where each and every citizen can enjoy his rights and his freedom like anyone else in the civilized free world.

The entire crowd welcomed the notes of one tribal Sheik from Sadr city who raised an objection to one clause in the punishment law which states that teachers and husbands should not be persecuted if they use disciplinary beating against their students or wives respectively. in his unexpected note, the sheik asked the committee to include correcting this clause in its agenda.

I learned that next week there will be a bigger conference with press coverage in the convention center and then participating politicians, activists and organizations will be asked to give their signatures and declare commitment to supporting the community’s efforts. 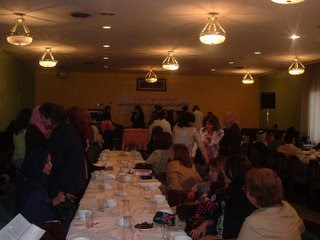 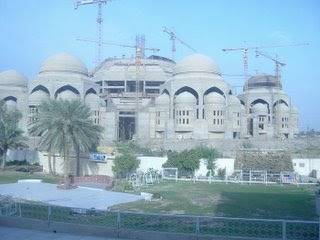 Through the window I could see one of Saddam’s ways of wasting Iraq’s money; work in this needless gigantic mosque started in 1990s during the sanctions but Saddam didn’t last long enough to finish it. (Any ideas for investment?) 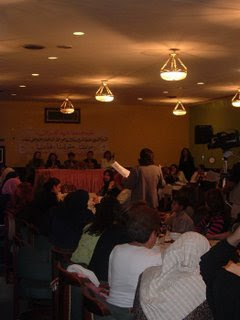 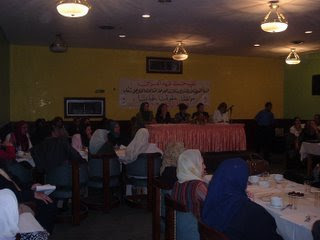 The interesting thing about this meeting and similar ones is that civil society organizations began to modify their methods of applying pressure on the government and politicians, so instead of waiting for politicians and parties to present their platforms, now we have emerging organizations that decided to jump a couple of steps ahead and start telling politicians and parties what the people want to see in electoral platforms and what kind of a government people are willing support.

I wish them success in this campaign.
Posted by Omar at 14:58

I will be your frequent visitor, that's for sure.