Probably the worst thing today is the intense heat which was a little over 100f but that didn’t stop the crowds from walking in the sun to the voting stations, I personally had to walk nearly 4 miles in total but it’s definitely worth the effort.
The presence of Iraqi army and police units is heavier than it was in January elections and I also noticed that no multinational forces were on the streets and the only sign for their presence was the helicopters that patrolled the skies.

The turnout in our district looks quiet good and actually going to the voting office was a good opportunity to meet some friends I haven’t seen in months.
I met one friend on the way and when I asked him what would his vote be he said that he hasn’t decided yet “if I voted yes I would be approving some articles that I don’t agree with and if I voted no we would go back to where we started from…” he said and that was really refreshing because this guy who used to believe in conspiracy theories and stuff like “what America wants is what’s going to happen” now feels that his vote can make a difference.

Generally speaking, the process is going smoothly so far and this is encouraging because terrorists usually concentrate their attacks before noon so hopefully it will continue like this for the rest of the day. 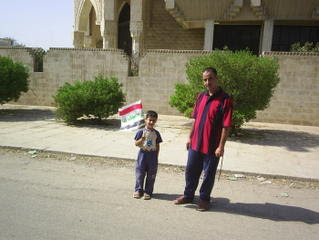 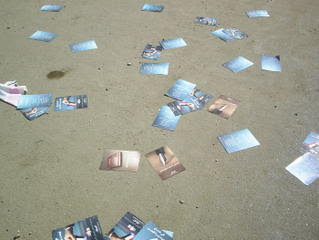 Flyers encouraging the voters to vote in the referendum were distributed abundantly in Baghdad. 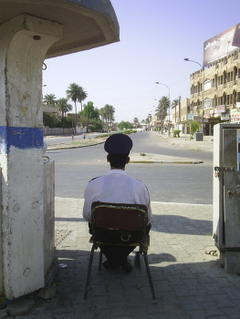 By the way, Sooni has more good photos.

-An official of the electoral commission announced that voters in any given province can cast their votes at any station within the borders of that province; this can make reaching the stations easier for some people who live far from their originally designated stations.

-Another electoral commission’s official in Erbil said that turnout in Erbil is light so far and he attributed that to the “concessions made by the Kurdish parties which Kurdish voters did not see appropriate”.

-170,000 votes were cast in the first 3 hours in Kirkuk, that’s around one quarter of the registered voters in the city.

-One attack was reported in Hilla; three armed men attacked a voting office but Iraqi security men were able to arrest the attackers. Nothing reported damaged in the office, one attacker was shot in the foot!

-Voting stations in Tal Afar are open but no reports on the turnout in the town, however the local officials of the electoral commission in Mosul said that the number of voters who turned out in the city is a “surprise”.

-(4:45 pm local time) Turn out rate in the Kurdistan region has exceeded 70% of the registered voters.
Sources: Al-Iraqia and Al-Hurra TV.

(5:01 pm local time)Time is up and doors of the voting centers are closed now and only voters standing in line will be allowed to cast their votes.
Counting the votes is expected to start soon and the results will probably be announced within 3 days acoording to sources in the electoral commission.
Posted by Omar at 07:07

All pizza places of USA http://pizza-us.com/oklahoma/Norman/Little%20Caesars%20Pizza/73071/

It was many years ago we first selected Top Restaurants in the U.S. See it. http://restaurants-us.com/ca/College%20Heights/Los%20Reyes%20Restaurant/93305/