I often find myself in arguments with people about the behavior of American soldiers when they search homes and many of the people I talk to base their argument and negative impression on the footage of some raids we see on TV or on experiences of presumed relatives or friends.

When I try to counter the idea of 'they knock down doors unnecessarily, steal jewelry and treat people bad' by saying that there must be a good reason the troops sometimes act rough and that 'for every reaxction there must have been an action' I often get the response of "what do you know about that? The Americans never searched your home"

Well, last night they did…

It was around midnight and we were gathered around the fire in the backyard when we heard someone talking in English in the street.
Go see what that was, Mohammed told me.
I approached the front door and peeked into the street, a number of Humvees were there.
I returned to the group and told them we might have some company.

Almost every Friday night we gather with some friends for drinks and barbeque and we all take turns hosting the nights. Yesterday it was our turn.

I went to the living room where my father was having a heated political debate with his friend and told them the house would likely be searched. The two men stopped talking, looked at me carelessly for a second and then resumed their loud debate.

I went back to tend the fish we were preparing for our Masgoof dinner and then heard the front door open and a flashlight beamed into the driveway.
I walked to meet the night visitors; 6 or 7 American soldiers and an Iraqi translator wearing a black ski mask walked in.

Good evening gentlemen, how can I help you?

Hi, that's a lot of cars you got here! Are they all yours? The lead soldier said, obviously suspicious about the number of cars we had in the driveway.

That one is ours, the rest belong to our friends. And explained that we had guests and that in order to avoid the curfew they are spending the night here.

As was speaking two of the soldiers were using the lights on their rifles to look through the glass into the cars.

Who are those people back there?

Those are our friends and my brothers, I said as I lead the way into the back yard.

The Iraqis and Americans exchanged words of greetings. 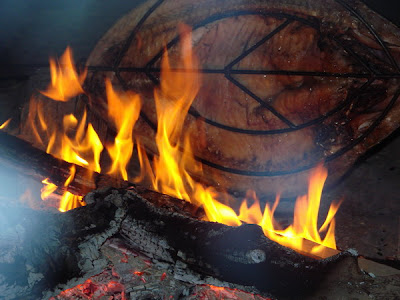 The soldiers now began to feel a bit relaxed seeing the relaxed friendly mood, the barbeque and the drinks in Iraqis' hands.

There's enough food and drinks for all of us here, please join us, said one of my friends.

Nah, we can't do that. Thanks anyway.

We know the Americans were on duty and had a job to do so we didn't repeat the offer violating the tribal Iraqi tradition of persistently offering food.

One of the soldiers asked for the keys to the cars and he and his colleague started checking them one after the other.
I lead three others into the house showing them the rooms explaining what each one was.
When we entered the living room they were surprised to see 4 laptops scattered around.

What are these for?

One's mine, the other is my brother's and the rest are our friends', I said and explained that our friends always bring their laptops with them when they come because they can use our wireless.
My brother and I are bloggers, our friends work in the computers business, I added.
Ah, you got wireless! I should bring my laptop too next time I come here, one of the soldiers joked.

We went up to the second floor, then the roof and they looked around around, opened a few drawers, asked if we had any weapons. I told them we didn't have any.

Within roughly 20 minutes the soldiers had completed searching the house and by now they seemed convinced that this household is 'clean'. So we all went back to the back yard and gathered around the tasty-smelling fish and we all had some short friendly talk about food, booze, the city, the war, the internet, etc.

At the end we stood to take some pictures together.

These are bloggers dude, cover your face if you don't want to be seen nude on the internet tomorrow! One soldier said to his colleague as I snapped this photo, and we all chuckled.

And I know what you're thinking; Mohammed and I do not appear in this one.

The Americans and Iraqis shook hands and exchanged take care's and stay safe's.
They went on to continue their patrol, and we went back to our fish.
Some of us will definitely have a joke or a short story to tell from this night, I thought.

I realize that for some other Iraqis having their homes searched wasn't as smooth or as pleasant an experience as ours but this is my story and I thought I'd share it.
Posted by Omar at 15:34

can i buy xanax online xanax - xanax xr vs generic

soma muscle carisoprodol side effects - what drug class is soma

Hesselberg Drug St Louis diflucan for men - buy diflucan without prescription http://www.diflucansaleonline.net/#buy-diflucan-without-prescription , how to get diflucan

oZzy moved away ever before, I miss his cock, for always hungry for sexual intercourse.

This website was.
.. how do you say it? Relevant!! Finally I've found something that helped me. Many thanks!