This one was close.

I was on my way home from downtown Baghdad and as usual I took the 'Mohammed al-Qasim' highway which is the fastest connection and most reliable road that runs across Baghdad from north to south.

Just before reaching my exit I found that the army had closed the highway and saw American soldiers nearby. First I thought it was a routine security operation or a new checkpoint.

I and the dozens of drivers around me were expecting traffic to reopen at any minute but then happened what we didn't expect; a massive explosion rocked the area and huge plumes of smoke rose high in the sky.
It took more than a few seconds to collect my thoughts realize what happened…looks like we just had a controlled detonation.

The smoke obscured the scene that it took another minute till I could see where the smoke was coming from. It was the beautiful building of the finance ministry. 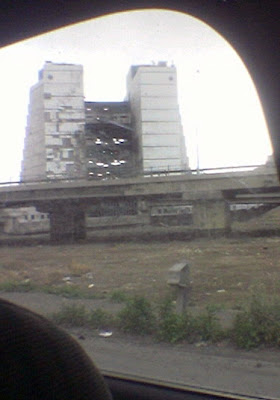 The damage as you can see is tragic and even worse the explosion caused part of the highway bridge on the other side to collapse to the ground.
This building is an icon of this city; I knew it for many years and I pass by it almost every day. I even wrote two years ago on how it was reconstructed after it was looted and set on fire in 2003.

Watching that building in ruins again is painfully sad, but we shall rebuild it again.
Posted by Mohammed at 15:48