A plateau for now, but more action is in the air. 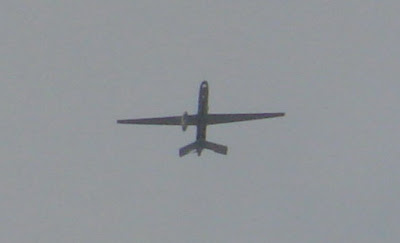 Little has changed in Baghdad since the last Imposing Law update we made a week ago. After the first month of the operation in which we saw dramatic developments, things in Baghdad seem to have reached some kind of plateau.
Still there were some interesting bits of news today, with both political and operational significance.

Ahmed Farhan Hassan has been captured. This operative is described as a senior aide to Abu Omar al-Baghdadi the leader of al-Qaeda’s so-called Islamic State in Iraq. That would make him a reasonably big fish, one from which, it would seem, good intelligence can be extracted.

Local Iraqi TV aired recorded confessions of Ahmed Farhan Hassan. Hassan, who was captured in Abu Ghraib west of Baghdad a few days ago, spoke about his connection to al-Baghdadai, and I’m paraphrasing:
“I have four emirs operating under my command. I receive money directly from Abu Omar and then I distribute it among the members of my units according to the number and size of operations they carry out.”
Quoting Iraqi military officials, the TV report added that Hassan admitted to have been responsible for some 300 murders and about 200 kidnapping incidents since he joined al-Qaeda three years ago.

Overall, the security operation continues to gain more support among the political parties, including some that were skeptical in the beginning out of fear the operation would not be impartial. Today a spokesman of the Accord Front, to which VP Hashimi and deputy PM Zobaie belong, affirmed the AF’s support for the ongoing operation saying, “Our bloc, seeing the security forces covering Baghdad’s districts and operating without discrimination, is now convinced that the operation is unbiased.”

On the other hand extremist parties of both sects continue their criticism of the operation, in stupid and somewhat amusing ways. One case I found funny is related to the recent discovery of a large weapon cache that included 470 anti-tank land-mines in Jameela district near Sadr city. The discovery of the stash was reported by MNF-I website, as well as Qasim Ata the official spokesman of Baghdad operations.
Neither report accused a specific entity of being responsible for possessing the cache, but then I saw the Sadrist lawmakers (I mean lawbreakers) on TV gather reporters to tell them that the whole story about finding weapons is a lie!
It was a textbook example of how denying involvement in a crime can only make people believe that you are indeed responsible.

Last but not least, there are now rumors that major operations will be launched soon on the outskirts of Baghdad to extend Imposing Law to adjacent provinces. This according to al-Sabah citing anonymous sources:
“Commanders of Baghdad operations will attempt to clear and seal the circle around Baghdad to prepare for directing military effort toward adjacent provinces where militants who fled Baghdad sought safe havens. Sealing the circle around the capital means starting a massive offensive on militant hideouts in Anbar and Diyala provinces in the first major effort to extend Imposing Law beyond Baghdad”

This expanded offensive, the report says, will begin pretty soon. We shall see.

Looks like a second big fish has been captured! A terror cell responsible for bombings that killed and injured nearly three thousand Iraqi civilians is now in custody.
Posted by Omar at 16:54