Operation “Imposing Law” continues in Baghdad. In contrast with previous operations to secure the city, this one is managing to not only keep the initial momentum, but the operation’s effects seem to be growing as well.

A few days ago the government announced a more traffic-related measures to support “Imposing Law” in Baghdad. Under the first order, it will be forbidden to park any private vehicles in the main streets of the city.
Under the second - a reinstating of an old order- vehicles with odd and even numbered plates would only be allowed on the streets on alternate days. This means that only half of the several hundred thousand of private vehicles will be on the streets on any day. The order applies to private vehicles only, but cuts the work involved in screening vehicles approximately in half.

Aside from security concerns, the order also reduces the huge traffic jams caused by the numerous checkpoints. The downside, if any, is being felt mostly by one particular class of Baghdadis: taxi drivers. They can now work only every other day and still have to live with sluggish traffic and expensive fuel.

Still, things are a long way from perfectly peaceful. Bombs continue to disrupt the calm of Baghdad. The suicide bombings carried out by al-Qaeda constitute the largest number of incidents. At the same time there has been a sharp decline in the number of bombings set off by remote control on the part of the regular insurgents.

As we noted in earlier reports, we feel safer about moving around in the city now than we did a month before. I have recently been to districts in Baghdad where a month or two ago I wouldn’t have thought of going to. In the last week or two I’ve showed my ID to soldiers and policemen in checkpoints dozens of times. A few months ago this was considered an extremely risky thing to do — especially for someone whose ID shows a name and profession such as mine. “Omar” is a pure Sunni name and everyone here knows that scores of young Baghdadi men were killed by death squads just because they had the name.

Numbers are always useful in assessing results of any effort, and the numbers so far are on the good guys’ side. I read today that the count of various death squads’ victims for this month is one half that of January, and little more than one third that of December of last year. This comes from the official figures reported by the Baghdad morgue.
The other number that’s become one of the important parameters for assessing the situation in the Baghdad is the number of displaced families that have returned to their homes since the beginning of Operation “Imposing Law.” This one too is giving a positive sign. The last official count by the authorities brought the total to little over 1,020 families in just two weeks according to Baghdad paper al-Mada. 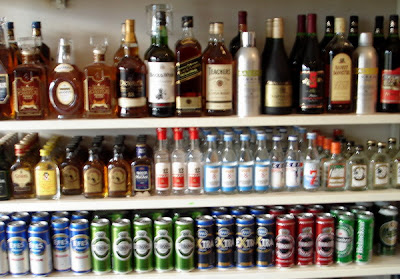 While many Iraqi families are returning to the homes they once were forced to leave, there are also Baghdadis who are reopening their stores, ending the months they spent out of business because of violence and intimidation. Some streets that were virtually deserted a few months ago are slowly showing signs of returning to life.
The reopening stores even include some liquor shops! There are two stores on one street that I used to shop that closed early last year when their owners received death threats from the insurgents and the militias. Yesterday I walked through that street and, to my amazement, I found both stores open and back in business.

Of course the reopening of two liquor stores is no big deal by itself when we are talking about a city where thousands of businesses are still shuttered. I regard this as a further positive sign of a change in Baghdad’s daily life. It means that those shopkeepers are leaving their fear behind, and openly ignoring the threats of militias and insurgents who once ruled the streets and intimidated the people with threats and violence.

The results of Operation “Imposing Law” are not magical. We didn’t expect them to be magical. The commanders didn’t claim they’d be when the Operation began. Still these latest developments are certainly promising. And let’s not forget that what has been achieved so far was achieved while many thousands of the new troops assigned to Baghdad are yet to arrive.
Posted by Omar at 16:42