Why in my garden? I'm not Frodo!

On one cold morning in December I was drinking my coffee in the garden when this ugly object flew two hundred meters from an IED site and landed just next to my feet.
It was still hot when I picked it up from the grass…from the serrations on the broad end and the way it was bent I knew it was part of the base of some artillery shell that was part of the freshly detonated bomb I just heard. 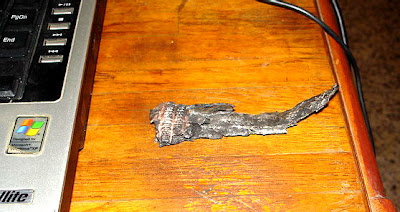 Among the countless various bullets and fragments I've seen and collected over years from three wars this one is, well, my favorite that I still keep it on my desk. Actually it's more like a mixed feeling of despise and amazement that I can't describe well.
As a huge fan of the Lord of The Rings, both the movie and the game-and I'd suspect many would agree with me-I think this is the best accidental representation of the severed finger of Sauron…


It's creepy how an act of evil managed to produce what qualifies for a piece of artwork, only to summon an evil character; one that belongs to a movie though.
Posted by Omar at 13:45