One more week to go!

Last night we had made a report on the different electoral circles in Iraq and we stated our expectations on the distribution of votes. The report was posted on Pajamas Media. Take a look!

Elections are only one week away, the preparations are taking shape and the competition intensifies among the candidates and lists and I’ll try here to illustrate the most significant of the latest developments reported by a variety of local news outlets.

Mr. Aa’dil al-Lami the administrative manager of the IECI (Independent Iraq Election Commission) revealed in a conference with election monitoring teams that many wrongful information were found in the applications submitted by people applying to be election stations officials.

Al-Lami said that serious measures will be taken to expose and prevent corruption from happening. Meanwhile the IECI announced that they have so far registered 70,584 election monitors and 152,790 representatives of political bodies. Those 223,374 people will be standing in every voting station to monitor the process and (hopefully) report incidents of fraud, manipulation, violence or malfunction.

The circle of violence seems to be going hand in hand with the preparations; today one of Mithal al-Alusi list’s members was assassinated in Baghdad when he was shot while driving his car in A’adhamiya district.
The INA of Allawi comes under attack again, today their office in Kerbala was assaulted and its furniture was burnt by “unknown” gunmen.

In the same regard American troops increase activity in Najaf after these troops greatly reduced their activity few months ago, apparently as part of a plan to reinstall order or prevent violence from affecting the parties’ campaigns or the election itself especially that Najaf witnessed an attack by nearly a hundred militia men on Allawi last week.
It was also revealed that an investigation has been opened in this attack to identify the offenders.
Meanwhile, the government declared emergency laws in Mosul and Anbar for 30 days as part of the measures aimed at creating a safe environment for the awaited election. It was also announced that international borders with Syria will be sealed until the elections pass.
In the latest post we reported about an attack on the Kurdistan Islamic Union’s office in Duhok, yesterday Masoud Barzani the president of Kurdistan and head of the KDP condemned the attack and denied the accusation that Peshmerga loyal to his party were involved and he also ordered an investigation to be carried out.

The controversial former defense minister Hazim al-Sha’lan who’s been accused of stealing/wasting one billion dollars from the ministry’s budget returned recently to Baghdad. Most likely to deny the accusations and look after the final stage of his campaign. The United Iraqi Alliance’s bloc in the parliament repeatedly demanded removing parliamentary immunity from Sha’lan but these demands were also repeatedly blocked by the Kurdish bloc.
However, the parliament has had its last session two days ago ending the mission of the interim Iraqi national assembly. This means that the now considered former assembly members such as al-Sha’lan are no longer protected by parliamentary immunity so it is expected that the United Iraqi Alliance will try again to get an arrest warrant on al-Sha’lan.

The results of a public opinion pool conducted in Babil province showed some interesting findings; the poll conducted by al-Mada research institute interviewed 460 men and women in a random sample technique from both the urban and rural parts of the province.
When asked if they were going to vote or not, 96.7% answered with “yes” while in only 3.3% of the cases the answer came as “no”.
When asked which list they’re going to vote for, 41.6% said they’ll be voting for the United Iraqi Alliance, second came Allawi’s “731 list” with 24.6% while all the rest of lists shared 15.5% of the votes in the poll.
The remaining 13.8% said they hadn’t made up their minds yet, something not unusual if we know most people know very little about the lists’ they’re supposed to chose from.
This poll showed that 77% of the interviewed people knew only the head of the list (24.8%) or a few more members of their favorite list (52.2%).

To be frank to you, I haven’t decided who to vote for until yesterday for the very same reason. Yesterday we were discussing the this subject with some friends, most of us found themselves swinging between two or three lists and couldn’t reach a final decision on our votes. Gladly we found that the IECI had the full lists of candidates in all Iraqi provinces unlike last time in January when most of the candidates chose to hide their names out of fear.
So we brought a small whiteboard and wrote down the names of the top ten candidates from the five lists we were discussing, we made a comparison and then three of us (including myself) reached a final decision on who to vote for…no, I’m not telling you my choice know! 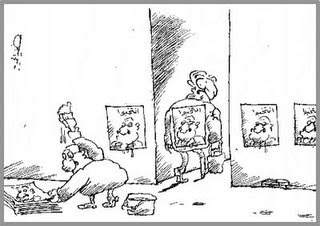 I’m leaving you with this cartoon by Khudair al-Himyari through which you can get a glimpse of what walls in Baghdad look like with the gazillion election posters added up every day!
Posted by Omar at 13:07