It's only a matter of hours now! 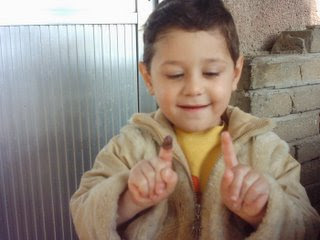 Now it’s 6 pm in Baghdad and the curfew has officially started. Actually streets in Baghdad were technically empty all day except for people carrying badges or emergencies.

We are hearing sporadic gunfire from time to time and sometimes we hear some explosions but there are no reports of a major incident.
Almost every Iraqi is at home now looking excitedly and anxiously at tomorrow’s event and words like election, vote or list are in every conversation among any two Iraqis.

All candidates have entered an “electoral silence” which means that all campaigning activities have virtually stopped.
No papers were printed this morning and officials from the IECI are on TV all the time giving instructions to the voters and the lists and urging the people to report on any incident of fraud of violence they happen to know about.

With joy, worry, fear and hope I await tomorrow. Our hearts beat fast hurrying the clock to bring us faster to the other shore.

Tomorrow it’s going to be us who decide and I can feel the greatness of the responsibility because the result will draw the shape of our future and will determine how long it will take till we can announce victory in this war; our war against the past, against the past’s illusions and the past’s mistakes; with our hands we can make this war last shorter… with our own choices.

One year ago we wanted to defeat terror and the shadows of dictatorship and tell them that we are not willing to go backwards and that we’re ready to build a new Iraq where the people choose their representatives…
The choice didn’t matter then as much as voting itself did; all we wanted to do was to go and cast our votes regardless of the choices we made.

Yesterday we were sitting together with our friends talking and discussing our points of view. We found that our ambitions are way bigger than the mere idea of voting or practicing our right to elect, now we feel that our votes are a responsibility and a heavy one.
We are hesitant and worried about our choices and maybe the opinion polls results that we’ve seen-or at least from what I hear from people I meet-indicate that there’s a higher percentage than normal of people who haven’t made up their mind yet on who to vote for.

Me and my friends were sitting discussing “who’s best for Iraq?” and the reasons on which each one of us based his/her opinion. I was seeing a drastic change in the sense of the historic responsibility we shoulder.
I see my friends call their friends and acquaintances encouraging them to vote for this candidate or that list and putting effort in convincing them with this or that idea.

In a matter of one year questions and answers changed a lot; less than a year ago the question was “will you vote?” But now the question is “who are you going to vote for?”
We are making progress, definitely we are!

Anyway, I see most of Iraqis making their choices by comparing the names at the top of the lists while there’s an educated minority who look at lists as a whole but either way it is all fine, we’re still carrying much of the totalitarian heritage from the past decades. Here we have a proverb that says ‘health comes in steps” and the thousand mile journey starts with a step, you know.
It is unfair to consider time our enemy; yes, we are a bit slow in absorbing the new reality but do not blame us for being slow; we have lived long enough under the reign of a devil who filled our ears and minds with wrong beliefs and ideas and the sunshine we see now will certainly confuse our first steps.
There were researches and reports that said “Iraqis are optimistic about their future” and I don’t think our readers here were surprised by that but I’m sure those who used to criticize us for being optimistic were surprised if not shocked.
Yes, our present is rough and bloody but don’t we have the right to dream of a better future?!
The pessimists had facts to rely on and we also have facts on which we build our attitude but we try to see beyond the smoke of the battle.
We don’t have a wand or something and we know nations do not build their history overnight but we believe we are walking the right path.
They say the people can be fooled once but they cannot be totally corrupt…and one or two rounds of elections are not enough but we have no better choice than to keep trying and to listen to what the people say.
Maybe we’re not smart enough to learn from others’ mistakes but Iraqi’s are capable of learning from their mistakes and correct the path.

I’ll go and vote tomorrow and I will be adding one more brick to the building.
I’m very proud of my nation for it didn’t surrender in spite of all what it’s been through; this nation is fighting, deciding, challenging, falling and rising and trying to learn.
Posted by Mohammed at 10:10