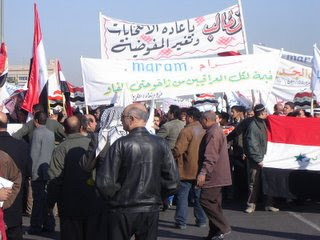 In Baghdad, Amman and Sulaimaniya the meetings continue between representatives and leaders of the major Iraqi political bodies.

The past and current meetings are all in preparation for an expected summit in Sulaymaniya where the leaders of the four major lists (Allawi, Adnan al-Dulaimi, al-Hakeem and Barzani as well as president Talabani) are expected to discuss and work out a solution of the dispute over election results and the shape of the new government.

There was news that the meeting will take place tomorrow but the spokesman of president Talabani denied the news, however a source from Erbil’s regional government said the meeting will be next Saturday.
Probably the contradiction in news is intended for security concerns, the pther possibility is that the meeting has been postponed due to political difficulties in gathering the rivals.
Anyway, a meeting will most likely be very soon because al-Hakeem has already arrived in Erbil.

I think the Kurdish politicians will ask for something in return for the great efforts they’re doing and when an agreement is reached among the UIA and Maram, I expect the Kurdish alliance to come up with new demands.
Anyway, if they really help the country pass the crisis, they will have earned a nice reward.

Mehdi al-Haqfidh, planning minister in Allawi’s government said the Iraqi list and Accord Front have agreed to not discuss the formation of the government with other parties before the election results are “discussed and corrected”.
Al-Hafidh pointed out two key factors that he considered essential for reaching a solution; the first is tolerance for all manners of peaceful political work and the other is that all parties must avoid all forms of violence and must not misinterpret or overreact to the actions of the people.

The leader of the Accord Front Adnan al-Dulaimi who was in a short visit to Cairo to meet the secretary general of the Arab League Amr Mousa said they in Maram have established a number of specialized work teams one of which will be dedicated to collecting evidence of election fraud and announced that Allawi has been authorized to negotiate on behalf of Maram and to deliver messages to the Arab League and the UN to describe the extent of violations and convey Maram’s demands of redoing the elections.
This marks a change in Maram’s demands; now they want elections to be redone in only four provinces-Baghdad, Kirkuk, Basra and Babil-instead of the entire country.

Al-Dulaimi also denied the news reports that said the front was willing to pull back their objections if given ten seats from the UIA’s share.
Actually I find it quite interesting that Maram which is mostly Sunni with a large Islamist component chose a secular Shia for leading a great deal of their political campaign. I think it shows a recognition of the leadership skills Allawi enjoys and it means that parties within Maram have to some extent were ready put fanaticism aside when their interests are at stake.

This morning Maram had another peaceful demonstration in Baghdad, thousands of their supporters marched through the 14th of Ramadan Street carrying Iraqi flags and posters and banners of the different parties united under the umbrella of Maram:
“We do not want to boycott the political process in Iraq, on the contrary, we want to push it forward but we must not forget that fraud must be exposed” Said Ali al-Timimi, a spokesperson of the demonstration.

The UIA and Kurdish alliance made some statements too, Abbas al-Bayati from the UIA said they are planning in the Alliance to form a national unity government “not because we are forced to do so but because do not want to monopolize power. We can’t ignore what others achieved in the elections but the magnitude of our achievement must be respected because it represents the will of the people…the UIA believes in the in the strategic importance of a national unity government but that must not be used to put pressure on us”.

Ridha Jawad Taqi, a SCIRI member said there was a meeting yesterday between Aadil Abdulmahdi (the SCIRI’s candidate for PM) and Tariq al-Hashimi the head of the Islamic Party where they discussed several issues related to the security situation and the dispute over election results. Taqi said that “there’s a good chance for a solution in the horizon and in principle, everyone agrees to idea of a government of national unity”.

Barham Salih the planning minister and senior Kurdish politician who’s now in Sulaimaniya told al-Sabah that “threatening with violence are not acceptable but law should be allowed to take its course regarding the fraud accusation” and added “what we are hearing from the leaders of the Accords Front and Iraqi list is different from what you hear in the media…there’s a basic agreement among us to let law and peaceful talks bring a solution…we haven’t reached a solution yet and the problem is still out there”.

In related news, al-Hurra said they’ve been told by Aadil al-Lami in a phone call that the election commission will be having a press conference tomorrow to announce the progress of their investigations. And it’s been reported that the UN is sending in 5 investigation teams to the southern provinces to investigate the accusations of fraud in the region.

Iraqi’s were looking forward to tomorrow’s summit but the postponement will add a few more days of expectations and anxiety to the streets.
Posted by Omar at 11:39

I’m not that much of a online reader to be honest but your sites
really nice, keep it up! I'll go ahead

and bookmark your website to come back in the future. All the best

Feel free to surf to my webpage ... http://Article-crash.info/Great-Holidays-To-Spain.htm