With all transperancy and clarity brother...

I never had doubts in the hidden intentions of those in Iraq who keep saying that multinational troops must leave Iraq soon; they say their demands are essential for national sovereignty coming out of their patriotic feelings for Iraq while I see them as far as they could be from patriotism.

If those people put Iraq’s and Iraqis’ interests first, they wouldn’t have asked the US to leave Iraq while the troops missions are yet to be accomplished and the Iraqi national forces are still not capable of protecting the country and the citizens.
We all know why some insist that US must leave or keep calling the presence of these troops an occupation. The problem is that the ordinary citizen here cannot talk about this in public for fear of being labeled as an agent or collaborator with the occupation and what can an unarmed citizen do to face such an accusation coming from this or that militia.
What pushes these politicians and militias to take this attitude is their dream of regaining sovereignty but not national sovereignty; it is their sovereignty over Iraq.

What is keeping these liars from making a large scale coup over the democratic change is the presence of coalition troops that are protecting the new Iraq.
Our newfound democracy is suffering a lot from the evil of neighboring dictatorships and the legacy of Saddam’s dictatorship and I see the only guarantee to the growth of our democracy until its institutions are firm enough and well established lies in the presence of coalition troops for a longer time. This requires not only the preparation of Iraqi security forces but goes beyond that to protecting the democracy until it passes the danger zone.

Thanks to the brilliant Iraqi cartoonist Mo’ayad Ni’ma for overlooking all the bull s*** that was said in the Cairo conference as he expressed clearly and courageously paint the intentions of those hypocrites in a genuine Iraqi style cartoon. 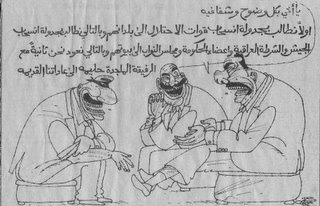 With all transparency and clarity brother, first we ask the occupation forces to put a schedule for pulling out to their countries and next we ask for a timetable for the withdrawal of Iraqi army and police, government officials and members of parliament to their homes and then we can come back to bring the good old days.


Happy Thanksgiving to everyone and especially to the soldiers who are fighting to defend freedom.
Posted by Mohammed at 15:30