It’s the trial again, and the streets in Baghdad are nearly empty as most people are sitting at their homes watching the proceedings of the trial; the best way to describe this is to say that it feels as if it were world cup in soccer where Baghdad usually looks like as if it were under curfew!

I assume the trial is being broadcasted everywhere in this world so I do not need to report on what’s happening inside the court hall but I can add a few notes on the atmosphere outside; in general many Iraqis still think the trial is moving so slowly but personally-as I said earlier-I think this is a healthy thing and it shows how emotions have no place in this trial and that the final word is for the law.
Judge Rezgar announced a one hour break; the hour will be over soon so I need to go back and watch but before I go I just want to say that Ramzy Clark’s appearance in the court hall gave me a good laugh; well at least his jacket did!

If I’m not wrong, he wore the same jacket he was wearing when he came to Baghdad to meet Saddam in 1990 actually I believe I never saw him without this jacket which makes me feel that some for some objects, time can freeze for 15 years so easily in spite of the speed at which our world evolves, just like this school computer I fixed with help from a friend after it’s been nonfunctional since march 2003! 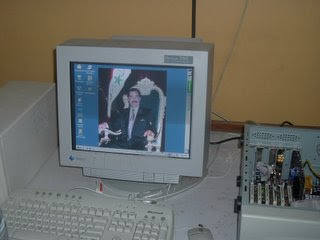 The trial has just been postponed till December 5th.
Too bad, I was looking for more action.
Posted by Omar at 07:02