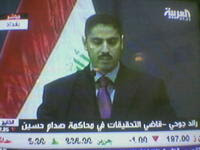 The latest announcement from the special tribunal in charge of suing Saddam and his aides was on air a few minutes ago.
The announcement was read by 'interrogation judge' Raed Juhi who considered this announcement as the actual beginning of Saddam's trial.

Juhi stated that investigations are going on according to the schedule and the deadline will not be exceeded.
He added that investigations will be completed within the next few weeks and that will include the cases of mass murders during Al-Anfal (in Kurdistan 1988) and following the 1991 uprising and other cases concerning eliminating political opposition parties' members.
The sources for information that are adopted by the court are mainly the following:

1-Official documents that belong to the ex-regime which are more than 2,000,000 in total.
2-Testimony from witnesses, more than 7,000 in total.
3-Evidences collected from over 200 mass graves after inspecting and analyzing samples of human remains to identify dates and reasons of death.

It is time to see justice rule…and the sooner the better.
Posted by Omar at 06:44