Not bombers or insurgents, they're terrorists.

More than a hundred victims was the result of yesterday's barbaric attack that targeted civilians.
All that death doesn't seem enough to wake some people up from their illusions and selfishness.

This is terrorism…and it brings nothing but death. 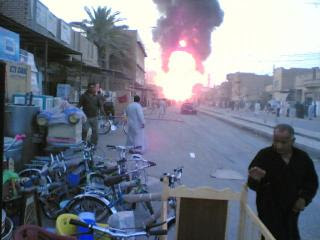 The government here announced Wednesday a national mourning day in solidarity with the families of the victims of the latest two massacres in Iraq.
But we hear nothing from our Arab "brothers" not even a word of consolation, rejection, condemnation; no nothing.
Even Annan condemned the attacks with a few words while the secretary of the Arab League, Amr Mousa didn't utter a word.

When Mohammed Al-Durra was killed by presumably Israeli fire, the Arab world got literally crazy and countless speeches, articles and protests were made in response to it but when Iraqi children are massacred by an Arab, Muslim jihadist then it's just another sad consequence of the American invasion!

It's not resistance, not insurgency and not guerilla war…it's terrorism.
Sadly, some stand reluctant and afraid of that calling things with their real names might approximate them with the side they oppose politically.
This kind of people usually find it easier to blame America or the Iraqi government as that would preserve their pride, and all we hear are things like "there would have been no terrorism if there were no Americans in Iraq….bla bla bla".

They hate to admit the fact that terrorism existed in Iraq long before America came to Iraq; terrorism and the regime were one hand committing a genocide against the people of Iraq, only it was broader and crueler than today's war but the difference is that no one could hear of that genocide; concrete walls and basements that housed countless torture chambers and the bodies were buried in secrecy and under the cover of the night.

No suicide bombers were needed because the regime was able to take anyone whenever and wherever they liked to torture and kill silently and without making any noise; no media was there to cover beheadings or to tape blowing up people or catch them being fed to the wild dogs.

But when the coalition came and freed Iraq from the head of terror and organized murder, the liberation was considered outrageous.

And then more terrorists started coming to Iraq announcing shamelessly that they want to avenge their master and help their "brothers" after they lost a key supporter who provided them with much of what they needed to spread their evil in the world.

Wake up people; they terrorists are declaring their intentions without fear or shame, so why do you try to ignore what they are not ashamed of declaring?
Terror had come here to rescue its base and leader, so don't stand against the people of Iraq and unite against this evil even if you had some differences among yourselves.
Let's unite our efforts and fight terror together; that's our only way to win.
Posted by Mohammed at 12:30