Hi again and sorry for the long absence, I spent the last couple of weeks wandering around in the cities of Kirkuk, Erbil and Sulaymania.
I've been to the 1st two cities more than once before but this was my 1st time to be in Sulaymania.
The main reason I made this trip was to get away from the elevating heat in Baghdad but I found that it's not that much cooler than it is in Baghdad, maybe only Sulaymaniya had temperatures lower than 40 centigrade which is good in our standards!
Anyway, the electricity was better than it is in Baghdad so that together with the slightly cooler weather made me feel that the trip was worth it.

I've been hearing a lot about how beautiful and quiet the city (Sulaymania) is and it didn't disappoint me at all; the city is living in peace and a great degree of order.
The funny thing is that in Kurdistan you can find restaurants and shops named after American cities like Washington Restaurant or Miami Jeans Store and stuff like that, you can even find American flags at jewelry shops along with crosses, Quranic verses, hearts and evil-kicking turquoise stones!(Click to enlarge) 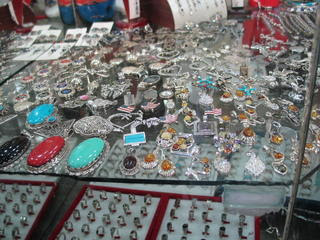 It was obvious that Sulaymania is a more modern city than Erbil or Duhok but the most impressive thing I saw was the amount of construction taking place over there; it was literally enormous and it was as if there is a building rising between every other two buildings. 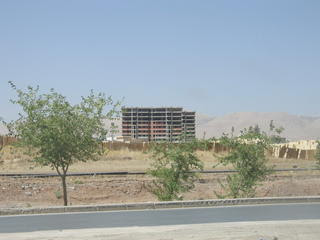 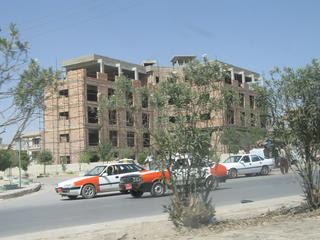 I find it interesting that I took this bunch of pictures within less than one mile in the same street. 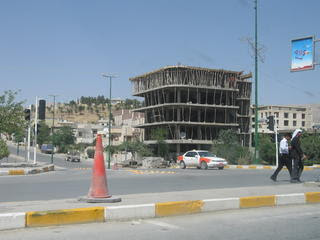 (The heat was telling me I should try these slides and take a dip in the pool! unfortunately they close on Friday mornings). 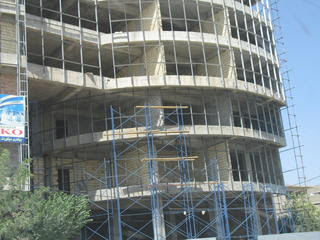 One very interesting thing I saw in Sulaymaniya was that I could find liquor at groceries; something extremely rare in Iraq as liquor is usually sold at specialized stores.
I have to admit that this is the highest rate of construction one can find in the whole country and the streets and market places were so busy and crowded especially in the late afternoon and early evening when the sun starts to go down and the weather cools down a bit. 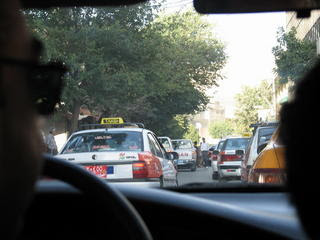 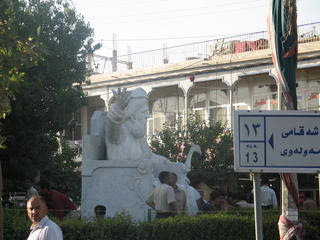 (I don't for sure who the gypsum guy is but prople seem to like hanging out in the grren garden that surrounds the statue).

As a matter of fact, the city looked dusty with all the piles of bricks, cement and steel rods lying in construction sites but my estimation is that within a year or two when all these works are done, the city will look just great!

Now let's turn 180 degrees and move to take a look at the very southern parts of the country; the marshes I mean; I found this update about the status of the marshes from Azzaman paper they mention that nearly half of the old marsh lands that were drained by Saddam are now covered with water again.
Click the link to get the full report.