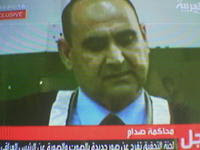 Half an hour ago, Al-Arabiya TV broadcasted a clip from the latest hearing session of the Iraqi special tribunal and this time the session dealt with another charge against Saddam; this time he was officially charged with forcing the "Faily" Kurds (the Shea't Kurds) out of the country and confiscating all their belongings.
The story is dated to 1980 after a Faily Kurd tried to assassinate Tariq Aziz and Saddam took revenge by forcing thousands of families to leave Iraq and confiscating their belongings and homes. The families were abandoned near the Iranian borders and they had to walk through minefields and that was the way many of them lost their lives or got injured.
Moreover, thousands were thrown in Saddam's jails and till now, the fate of many of them is still unknown.
After they came back to Iraq they faced big problems with tracking their siblings who were put in jail and more problems in getting their homes and lands back as Saddam distributed them among his followers and by time these properties were sold from one owner to another and it's extremely difficult to ask the end owners who paid for these properties to give them back.

Back to the session, Saddam looked quite tired and his hair was longer than usual.
He started talking by accusing the tribunal of being "illegitimate because the government isn't legitimate" but the judge replied calmly saying "the current government was elected by the people".
Saddam didn't like this reply and mumbled some obscure words like "you're a man of law and you know this whether you're Iraqi or not…".
The judge continued reading Saddam his rights of remaining silent and appointing a lawyer and here Saddam complained again claiming that he didn't meet his lawyer except during sessions but not before that.

I recall that when I was a kid, I had a friend named Amjad and we used to play soccer together in the street in our old neighborhood but one day Amjad stopped showing up and I missed my friend who was the only son for his parents.
I asked about him but I didn't understand the answer when I was told that Amjad and his parents were "moved".
"Where to?" was my question, "to Iran" my father answered.

I don't know what happened to Amjad and his family after that but today, I'm sure they feel happy.
Posted by Mohammed at 11:39