I feel that I need to comment on the latest pro-Syria demonstrations in Lebanon that were arranged for by Hizbollah.
I have noticed that some media sources are focusing on the size of the demonstrations and the number of the people who were gathered to attend at that time and place.
I think that the number of participants doesn't make a demonstration strong at all.
The BBC says :
The crowd dwarfed previous opposition protests urging Syrian troops to leave.

I think that the opposite is true as it proves how the tyrants in Syria and their allies in Lebanon are so scared of the growing sense of liberty among the people in Lebanon.
The reason why I adopt this opinion is very simple; the opposition rallies were calling for liberty to their country and rejecting the Syrian interference which has infiltrated all important life sectors in Lebanon in the last 15 years.
While Hizbollah's rallies are allegedly opposing the "western foreign interference" which in fact doesn't exist!
Moreover, these rallies are actually encouraging the Syrian interference (that's foreign interference, right?) in the interior affairs of Lebanon and condemning the decision of international community represented by resolution 1559.

I see no patriotism at all in holding pictures of another country's president (err…I mean tyrant) and chanting "Long live Asad…Long live Syria" when that very administration you're cheering and chanting for has been keeping your country a hostage for over a decade.

Another point is that bringing too many people by buses doesn't mean that you're right. Actually it reminds me of demonstrations in Iraq under the Ba'athist regime (Oops, I forgot that the Ba'athists still rule in Syria!)

At least one opposition leader said the pro-Syrian government pressured people to turn out Tuesday and some reports said Syria bused in people from across the border. The MSNBC reports. 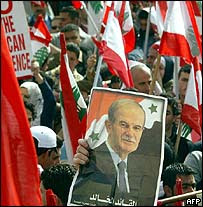 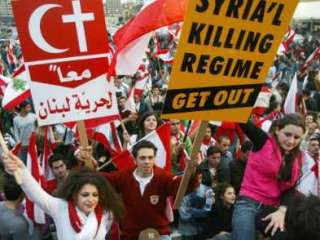 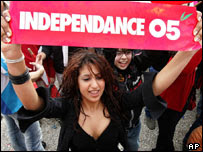