To the Iraqi teachers and students; with love!!!

And the terrorists' campaign to kill all aspects of humanity continues; this time with a direct threat addressing students in Baghdad.
This poster was seen in Baghdad lately, it has no ultimatum on it but the word on the streets says the ultimatum ends tomorrow morning. 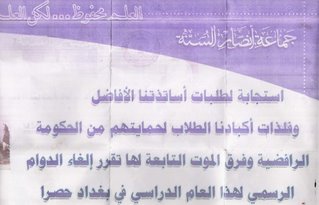 Here's what the poster says:

In response to demands from the honorable teachers and beloved students and to protect them from the Rafidhi [Shia] government and the death squads it endorses, it has been decided to cancel all studies for this school year in Baghdad exclusively

They did not say what the consequences would be for those who ignore the ultimatum but this at least constitutes a call for halting the very basic activities of a society with implicit threats for those who choose to do otherwise.
No one needs to read more to know the kind of punishment this terror group has designed for those who dare disobey the order. At least students didn't need to know more, the students I talked to today and yesterday were so scared. In fact they were terrified thinking about what the terrorists might do to them should they choose to continue going to school.

After all, we all know what those savages are like and how they look at education and particularly universities where male and female students exist and learn together.

Who asked for their protection in the first place?! The students and teachers? Of course not.
And if teachers and students want protection, they would want that protection to be able to continue their studies, not cancel it!

Schools were open today, most students went to their schools and colleges as they normally do and gladly there are no reports of attacks gaainst schools or students.
However, a not so small percentage of students skipped schools today and that percentage varied from one place to another, but all in all, there were more students in schools than at homes.

Meanwhile, the Ansar al-Sunna terrorists have released another poster, in which they announce (long story short) that the ultimatum was meant to address only university students and not high schools.
The new poster clarified the punishment part that wasn't explicitly described in the first one. 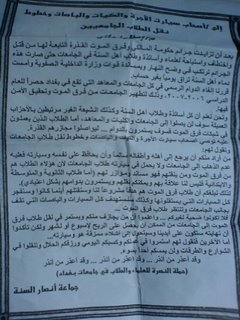 The message clearly says that students, teachers and even bus drivers who drive them to colleges, who choose to challenge the warning will be considered "members of the death squads...we will kill them anywhere they go and we will blow them up in their cars and buses".
Posted by Mohammed at 11:24

My point of view partially coincided with yours. Thank you for trying. antidepressants Read a useful article about tramadol tramadol