One reason why I love winter...

Finally, summer in Baghdad is coming to an end.
Although we still get temperatures slightly above 40c every other day, the overall averages are well below what we used to have back in July and August and temperatures at nights are going below 20c again for the first time since June.

These lower temperatures mean I'm going to be relieved from one of the most tedious and exhausting duties I had to bear for the past 3-4 months. That would be maintaining the power generators.

I have two of these things at home, pieces of utter junk, yet it's junk that you have no other choice but to rely on under the scorching heat of summer time in Baghdad.

These tow generators, each produce ~2.5 kw of power which is enough to cover the basic power needs of a household; fans, lights, TV, fridge, water pump and a computer. But this comes at a high expense; especially time-wise…keeping these two generators functioning cost an average of up to 2 hours of my time every day in the past 3-4 months.

I can't remember a day when both machines were functioning! At any given day there would be one of them yelling for some sort of maintenance. Aside from the daily oil-check and refueling and an oil change 2-3 times a week for each engine, there's a lot of maintenance to be done…
There's an almost biweekly change of carburetors, monthly change of engine valves. Every other while a retractable starting-cord would wear out and need replacement.
And at least once a month, each generator would need one major repair, for example, this season alone, I had to replace an engine and two generator coils.
Not to mention spark-plugs and silencers and exhaust tubes that rupture occasionally!

The problem that forces you to choose these pieces of junk is the limited range of options in the market. There are either those fuel-economic $200 things or multi-thousand dollar generators that are fuel-hungry. Even though fuel is available and cheaper now that the shortage is over, fuel prices and availability remain a concern because you can't take anything for sure in this place, and purchasing the wrong generator would have meant having to spend ~$600/ month for fuel alone at times when gas prices rocketed to $4/gallon! 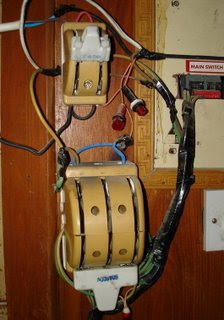 The picture should give you an idea of how the various power sources are organized in a common mains-box in the ordinary home in Baghdad. As you can see there are 2 'knife switches' which we call here 'change-over(s)' which we use to switch between two different power sources, so two of these switches mean 4 different sources, each has a small red indicator-LED that tells us which is on and which is off.

But that's not it, the number of power sources can further increase. In our home for instance we have 6 of them; 4 you saw above and 2 in two other locations but are sort of temporary/portable connections.

Each one of these 2 is basically a double long extension cord running between one home and a neighbor's, through which people can get electricity from their neighbors when one house has it and the other doesn't. These are often considered 'emergency' lines since neighbors usually have little extra power to share, so these extension cords are used to power the very basic needs of a household in the summer…a fan, a light and a TV set.

Anyway, I don't why I'm writing this but it's just that I feel so much relief the worst days of summer are gone, now I don't have to worry much about gas or cheap spare parts, and above all it means I can once again enjoy my treasured afternoon naps…
Posted by Omar at 15:10

I really liked your article. cardiovascular Read a useful article about tramadol tramadol