I'm back in Baghdad now after I spent a week in Cairo attending a seminar for bloggers and civil society activists that was sponsored by the Cato institute, American Islamic Congress and HamsaWeb. 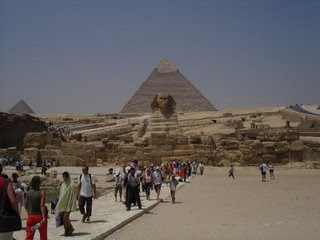 It was really an interesting and informative experience to meet and talk to people like Dr. Palmer, Johan, Zainab and Jess and the training designed and supervised by Dr. Shafeeq (head of the American University in Kuwait) were particularly excellent in exploring the potential skills of the participants.

In fact what was even more fun was meeting that little crowd of active middle eastern young men and women as we shared similar goals and discussed similar concerns and tried to work out means of interaction to benefit from the wide variety of skills and experiences we built amid the rough situations in the region to be able to face the threats represented by the totalitarian regimes and extremism which both refuse to hear anything that opposes their backward vision which they seek to impose over the peoples.

This kind of confrontation isn't easy at all and I applaud the courage and determination of those young people as they work hard in their communities to gain their rights and fight for freedom and democracy in an environment that can only be called hostile to anything new or different.

My participation in this meeting renewed my hope and strengthened my feeling that we're not fighting this battle alone. The beautiful thing about the meeting is that everyone is looking forward to see the Iraq experiment unfold to something good that will reflect positively on all those who have accepted the Middle East to be their home.

On the other hand the destructive effect of the media-that abbreviated Iraq to a car bomb leaving away or ignoring the other good side of the story which is the birth of a democracy-was also clear. I was trying hard to clarify the blurred image asking the others not to judge something huge like the change in Iraq through events in a relatively very short time compared to the history of nations.
I agree that the positive sides I'm referring to may not be visible amid the smoke of war but I could clearly feel them as I traveled to another country like Egypt and listened to experiments from other countries in the Middle East and north Africa.

It may sound a bit odd but that's really what I felt in Egypt that I don't feel in my war-torn city; for the first time in 3 years I felt the restrains of government…I told one of my colleagues I feel safe in Baghdad despite the dangers, I may feel afraid of terrorists or random violence but I never fear the government and that's not only how I feel, Iraqis are not afraid of expressing their differences with the authority because we in Iraq have more or les became part of that authority the day we elected our representatives while terrorists and militias are nothing more than temporary phenomenon that unlike constitution and elections have no solid foundations.

Of course our democratic foundations need a lot of work to meet our aspirations but we are walking this road and none of us is willing to go back and maybe the three thousands that were murdered last month tell that Iraqis are ready to pay the price and fight to preserve and improve our achievements. The magnitude of the change explains the confusion in some of our steps but we have not given up and we're not ready to surrender, not yet.


Back in Cairo I was sitting in the hotel's garden reading a book when I was surprised by a man, who reminded me of one of Saddam's security guys, interrupting my quiet afternoon reading and telling me without any introductions "Don't believe them!".
"Who are they?" I asked "those people" he said pointing at the book in my hand and added "we have a very good system that is represented by the government and Islam. Maybe we need some minor improvements but those people want to blow up our culture, history and beliefs".
I could feel that these remarks would be followed by an informal interrogation with questions about my colleagues so I quickly ended the conversation and avoided going into details. However this came as a flashback from the dreadful era of dictatorship that I've forgotten over the past three years.

I could feel eyes following me and walls recording every word I say that for the first time in years I feel I need to watch my mouth in front a simple cleaning worker in the hotel who was cleaning up the conference hall after one of the sessions. He said "if you want to change know that we're on your side" it may sound like a friendly gesture but I got scared and my immediate response was "No, no! this is not about any change!"

I wouldn't worry about talking about a change when I'm in Iraq; pluralism is a fact here and every party is seeking a change of one sort or another but I was afraid to talk about a change in a place where only one opinion rules and dominates everything.

At that moment I felt the difference and wished I could immediately go back to Baghdad. I know the balance is a tough one but those who seek temporary safety will never get safety.

I believe this battle is worth the trouble and sacrifice and perhaps this time I have additional reasons that motivate me to carry on; it's the people who are looking forward to seeing us succeed and our success here makes the road shorter and less costly to walk for the rest of the region.
Posted by Mohammed at 14:00

This is good site to spent time on. allergy