A few days ago we mentioned that we tend to believe that this ongoing war in-geographically-Lebanon is not only about Hizbollah and Israel; that it is probably the first stage of a wider regional conflict that is going to extend far beyond the borders of Lebanon and Israel.
What I want to add today is that it is not wise to try to deal with it in the same way previous conflicts were dealt with, why?
Because this conflict is not like any of the previous ones.

What we must realize here is the involvement of the theological (mythological) element in this particular conflict which is also the reason why this conflict has the potential to expand into full-scale regional war.

It is true that religion had always been playing a central role in the numerous chapters of the conflict between the Muslims and the West but this time there's a totally different theological belief that is being used by Iran to provoke and direct this war; I think the best way to say it is that we are about to see Iran launch the mullahs' version of an 'Armageddon'.
I know this may sound absurd and maybe some of you are thinking no one could possibly be thinking that way but remember, I am telling you what extremist theocrats seem to be planning for and logic has very little space in the mullahs' way of thinking.

I'm not going to claim I know exactly what Hizbollah's or Hamas's hidden motives are because I don't live there but I know about those of the regime in Iran and its arm in Iraq; both Ahmedinejad and Sadr are devout believers in the 'Savior Imam' of Shia Islam who is the 12th grandson of prophet Mohammed, also known by the name 'Imam Mehdi' hence the name of Sadr's militias 'the Mehdi Army'.
I must point out though that some factions of Sunni Islam also believe in the rise of the Imam but they have their own different version of the story.

Both Ahmedinejad and Sadr believe it is their duty to pave the way and prepare the ground for the rise of the Imam whose rise, according to their branch of Shia Islam, requires certain conditions and a sequence of certain events; the story is too long to discuss in one post so I'll just move on to offer my observations…

We are seeing some signs here that make us think that Iran and its tools in Iraq are trying to provoke the rise of the imam through forcing the signs they believe should be associated with that rise. One of the things that do not feel right is the sudden appearance of new banners and writings on the walls carrying religious messages talking specifically of imam Mehdi. These messages are getting abundant in Baghdad and in particular in the eastern part of the capital where Sadr militias are dominant and a special number can be seen in the area of the interior ministry complex.

The interesting part is that these banners appeared within less than 24 hours after Hizbollah kidnapped the Israeli soldiers. Coincidence?
I don't think so.

The messages on the banners are sort of new too and sound different from the ones we're used to read, I've took photos of two of them that read as follows:
"By renouncing sin and by integration for the sake of afterlife we become the best soldiers to our leader and savior the Mehdi"
"integration" here sounds meaningless in the sentence but it's just one of those words the Sadr likes to use!
And, 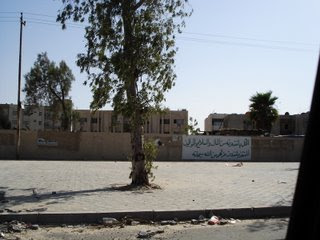 
You can see that these are written on white cloth instead of the traditional black, red or green of religious banners.
I asked a friend of mine who's aware of the dates of Shia religious occasions to check if there was one of these occasions around these days but the answer was negative.

We pointed out in an earlier post about the organic connections between the tools of Iran in Iraq and Lebanon and how Sadr was following Nesrallah's steps and I won't be exaggerating if I said that Sadr is even using the same structural pattern of Hizbollah for his militia, not to mention that Sadr's "foreign relations bureau" is based in Beirut!

Threatening with such wide-spread chaos is embarrassing to the world and especially to America and Europe and will probably move the latter powers to try to contain the crisis and prevent it from taking a wider scope than it occupies now and I'm afraid this could make the world look for symptomatic treatments instead of cures.

Those banners above represent an ominous sign and I'd like to say again that one should prepare for the worst from the very unstable mixture of religion and policy.

I went to a guy who knows quite a lot about this salvation war so to speak and asked him if the texts mention anything about the timing of the war and whether it's supposed to begin before or after the rise of the Imam and the answer was "After" but he added that chaos and rampant violence in the region are supposed to be among the signs and that the main battle would be "lead by the Imam himself".

The thing is that we can't be sure that they are going to play by book because throughout the Islamic history rulers employed what people consider divine texts to remain in power and make people obey them; and they did this either by twisting the texts through slanted interpretations or by making up the text as in adding thousands of texts that were claimed to be the sayings of the prophet.
Here we're most likely going to see a new maneuver and I expect that the "imminent" arrival of the Imam is going to be announced through the Mumahidoon (those who pave the way for the Imam) and that's what Sadr and followers describe themselves and that's the word they use for a title of their website. That's if they didn't claim they were receiving messages from the Imam via a messenger.

All previous wars between Israel and Arabs were of a pan-nationalist nature and used feelings of Arabism to push the people to war. Of course religion had a role too but now religion is going to push Arabism aside and be the dominant element in Iran's planned war because of the failure of pan-nationalism to retain its influence in the region after a long history of failures.
Iran's dreams in exporting the Islamic revolution were stopped by the once strong pan-nationalism in last quarter of the 20th century but today we're facing a renewed project of exporting the Islamic revolution in an attempt to fill-and taking advantage of-the vacuum left by the fading pan Arab nationalism…
And with liberalism still not strong enough to face such a challenge, I think the future of the region is in big danger.
Posted by Omar at 15:42