I left home this morning hoping to find the roads were opened as yesterday I couldn't reach the clinic; actually I was in the middle of the road when I was faced by crowds of pilgrims heading to Kadhimiya and I had to turn back.

I asked my neighbor who just came back from giving his daughter a lift to her work in the other side of the city. He told me that most of the bridges were closed this morning and that cost him twice the time he normally needs to get to his destination but he assured me that the roads that I need to take to reach my clinic were open.

So I took off-and thank God-my neighbor was right in what he said. I stopped for a moment to buy the newspapers as I do every morning but many newspapers failed to publish today and I guess that's because many workers couldn't reach their work places yesterday; I found only a few papers, Baghdad of Allawi's party which came without colors today! There was also the Arabic Al-Sharq Al-Awsat and Al-Taakhi of the Kurdish alliance and a few less know papers.

I chatted a little with the papers guy and I was told that a huge fire erupted late lst night in a market place that sells plastic appliances and toys in Al-Shourja "you'll see the plumes of smoke on your way" said the guy.
I was worried and depressed by the news of the fire as the affected building and its surroundings represent Baghdad's most important commercial center.

I started checking the headlines which mainly focused on the news of yesterday's tragedy of the bridge. There were stories of victims' families and of survivors and many commentaries were accusing the government of being responsible for the huge loss in human lives in one way or another.

I was still on my way to the clinic and when I got on the high way's bridge I saw the fire and the huge plumes of smoke that covered large areas of central Baghdad.
Unfortunately, in a city that is so big and under a tense security situation it becomes so difficult to deal with such big fires promptly. A terror attack is not unexpected as a cause for the fire although this badly planned super crowded sector of Baghdad came under fire several times in the last 5 or 6 years.
I don't think the investigation will be accurate as our state's investigation agencies are still way underdeveloped. 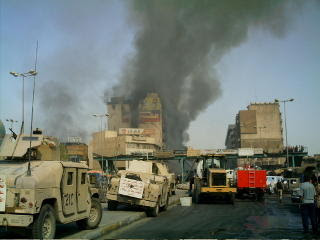 I kept moving and it was clear the streets are regaining their usual activity, people going to their works and all shops were open.
What is really amazing about Baghdad is its great ability to heal really fast. It's the long experience with stress, violence and crises that taught Iraqis how to rise after each time they fall; Baghdad is truly brave.

I reached the clinic to see that all the staff made it to the hospital, some arrived late though. We were trying to check on each other to find out if anyone (or anyone's relatives) was/were hurt in yesterday's tragedy and thankfully I didn't hear of such thing today.

During the tea break our talks were all about yesterday's loss yet the fire also had its share of the conversation; Baghdad is a big city and in many cases people miss events or incidents and they get to hear them from the radio or TV just like anyone who lives outside Baghdad.
Nevertheless the constitution wasn't absent and those who didn't have the chance to take a look at the final version were asking about the latest changes and agreements.
The colleagues shared the optimism about the possibility of reaching a compromise, one guy made a comment that was accepted by nearly everyone:

Even the Islamic party which represents the strongest opposition to the present draft announced that they find more that 80% of the clauses very good and the division points are few, though important but the people are divided about them as well, so why not limit the referendum to what is agreed upon by everyone to have a base to start from and schedule the rest to another separate referendum and if they get rejected we will still have 80% of the constitution approved and the remaining 20% can be the responsibility of the next parliament…

I think that people here began to realize that dialogue is the key and that adopting stiff positions does not serve the interests of Iraq since everyone involved in the process is looking forward to a new era of peace, tolerance and prosperity and they realize that there's still time for reaching solutions.

I went back to home and on the way I could still see the fire and smoke coming out of that building. The general situation looks frustrating but I have a strong feeling that terrorists and their supporters are way more frustrated. I can only imagine how they feel when they see the endless determination and the bravery Iraqi's are facing them with; the change in Iraq is moving on and on in a way that doesn't give the least impression that it can be stopped.

In fact, this continuous, confident political process is gaining momentum from the will of the millions of Iraqis who chose this way and I believe that the next march on October 15 will further empower the process and the next elections will add even more momentum to the change when more millions join the process.
Terrorists will thus need to come up with a reaction that equals and counteracts that of millions of people and that is impossible since their counts are negligible when compared with the Iraqi people.
The democratic process in Iraqi is the knife that can cut the head of terrorism.
Posted by Mohammed at 12:49