A suicide bomber captured before he could blow himself up in a Shiite mosque claimed he was kidnapped, beaten and drugged by insurgents who forced him to take on the mission. The U.S. military said its medical tests indicated the man was telling the truth.
Mohammed Ali, who claimed to be Saudi-born and appeared to be in his 20s, said he managed to flee after another suicide attacker set off his bomb, killing at least 12 worshippers Friday as they left a mosque in the northern city of Tuz Khormato.
In confession broadcast on state television later that day, Ali told Iraqi interrogators he did not want to bomb the mosque and hoped to go home.
Results from medical tests on Ali were "consistent with his story and characterization of his treatment," Col. Billy J. Buckner, a U.S. military spokesman said Sunday. 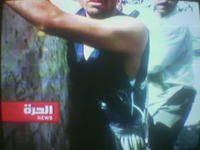 Actually the story was reportedby Al-Hurra on the same day of the attack (3 days ago) and that's where I captured the photo from. It's not a very good one but if you look closely you will see the wires hanging from the guy's waist that is surrounded by explosive materials.
Well, that doesn't surprise me, it's not the first time Al-Qaeda uses similar techniques.
Posted by Omar at 14:56