Who's ready and who's not? 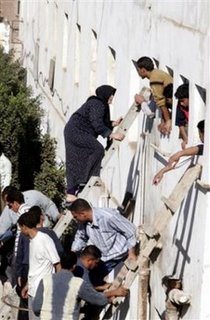 Some naysers like to say that the Middle East, countries with Muslim or Arab Majorities are still not ready for things like elections or democracy and some go even as far as saying that those countries do not want elections or democracy.
This is not entirely wrong because Yes, almost every government in those countries does not want to share power with others or let their peoples decide what’s best for their countries.
This update on Egypt’s parliamentary elections from Sandmonkey says a lot:

Those people braved serious injury so that they can go in and excersize their constitutional right to vote. The Police, which was supposed to facilitate and protect them tried to prevent them from even using that way to get inside the polling station.

My people in Iraq braved bombs and bullets to practice their basic right of voting and the people of Egypt are bravely facing state terror to do the same. The threats and dangers may vary in intensity but the spirit of the people is pretty much the same.
Posted by Omar at 08:48