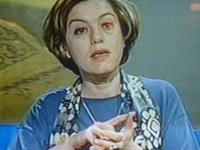 Day by day and as the deadline for finishing the draft of the constitution approaches, we see more hot debates and more active public activities and more interaction with this historic event that will decide the future of life on the lands of Mesopotamia and it's interesting (yet not surprising to me) that daily-life concerns couldn't stop Iraqis from engaging discussions and debates when it comes to writing the constitution.

In the latest episode of "Dostorna" (a program produced by the Iraqia TV and literally means "our constitution) an interesting debate took place among Iraqi women; they discussed constitution, Share'at and how these subjects deal with women rights and needs and the difference in view points was actually obvious between secular/liberal women and religious/conservative women.

The show was attended by an exclusively female audience and questions were directed to the main characters of the show (4 women; 2 secular and 2 religious sitting against each other to the left and right of the stage.
The debate was direct and frank and dealt with many hot topics in Iraq which included controversial topics like hijab, basic freedoms (according to civil constitutions), equality between men and women and the percentage of women's representation in the National Assembly. 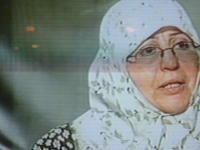 Right now, there's a big argument about the "137" law (or the social affairs law) which the Islamists failed at passing once and now it seems that many Iraqi women are determined to stop the Islamists from passing this law this time and actually many of the secular women expressed their disapproval of the attitude and opinion of some female Assembly members who were accused of "acting against the interests of other women".
A female colleague told me this yesterday:

"How could female assembly members support law 137? They want a full vote in the assembly but they want other women (and themselves) to have only half a vote and be treated as half a person before law!!"
Her observation is very interesting and requires stopping at because frankly speaking, I see that some women are acting against women's interests to satisfy the parties they follow which are of course religious parties.

However, what's good here after all is that we can all share and exchange thoughts in public and without fear. We're learning democracy and practicing it at the same time and this can make our steps rather slow and confused but I believe that we have passed (forever) the times where a dictator can rule Iraq.
The people will rule from now on and although the people might make a wrong choice once, they cannot go completely corrupt.
Posted by Mohammed at 16:10