I know I haven't been a loyal blogger to the readers recently and I apologize for that but I said before this is partly because of the summer season in Baghdad and all that comes with it.

The other reason is that my family is taking a long vacation outside the country, mostly to run away from the hottest part of the season; Aab al-lahaab (August of flames). Some in our parliament want to take a month-long vacation too but I'm inclined to think it's responsibility, not the flames of August they are trying to run away from…we'll see.
This leaves me basically with lots of cooking, shopping and cleaning to do since my brother Ali isn't that good at any of this kind of work.

While I'm going to particularly miss my two little nephews their absence also means I can enjoy weeks of quiet, you know, I love the idea that if I choose to not make a sound then there will be silence! I am glad I can enjoy this privilege for some time and I hope the silence will help me focus more on writing.

On the other hand being in charge of everything at home makes me pay attention to some details that I don't notice otherwise. The funnies and oddest so far was the phone bill I received a few days ago. It's the first bill we receive in more than three years which should be the case since our land line, along with a few dozen others in the neighborhood were cut when a cable was damaged in fall 2004. The funny thing is that the bill demands fees for the first six months of 2005 when we technically didn't have a land line!
I haven't decided whether or not I'm going to pay this bill but what could they do if I don't!?
The other thing I noticed, which was quite a surprise is that this little "daughter" as we say of one of our date palms is already carrying what soon is going to be sweet yellow fruit. Isn't that cute? 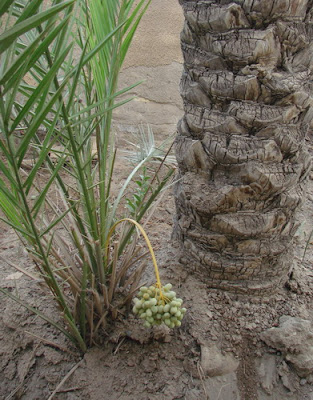 The main even that's been keeping me excited an entertained is the participation of our national soccer team in the Asian Cup. The results are excellent so far including this afternoon's match in which the team won 2-0 over Vietnam. This means for a change lots of the gunfire we hear in Baghdad are celebratory these days. Two hours after the match ended I still hear some gunfire but I can't tell whether or not it's still of the celebratory type.

These lines were not meant to be a serious post but I will end it with a quick update on some of the important parameters for assessing living conditions in Baghdad; the part where I live to be accurate.
Gasoline shortage is much less severe these days. It takes typically less than an hour to fill the car at the station and black-market price is down to only 3/2 the official price (60 cents/liter instead of 1.2 dollars last month). This can change in either direction at any minute though.
In electricity the supply has technically doubled. Don't get excited because by "doubled" I mean in increased from 2 hours/day to 4 hours/day. It's still better than nothing especially that we were expecting supply to decrease as the heat rises.

Like I said above I'm doing at least one shopping errand every day and this means I get to move around between groceries, butcher shops and bakeries more than I usually do and here too I noticed a new trend. The number of small businesses and shops did not decrease in and around our neighborhood as I used to think. In fact they just relocated from the main streets to the inner streets and alleys making it safer for both shoppers and store owners alike to do what they have to.

If I could do a short tour with a camera you would see that many of the stores the once busy commercial main street are now closed but at the same time many stores are budding from homes or simply appear in no time as new stalls are erected. It's one example of how the people have adjusted to the changing situation in some parts of the city.

One last thing, I will be on the air with a couple radio interviews next week. I will provide the when and where once they are decided.
Posted by Omar at 14:05