As we expected in the last post, the terrorists committed another crime against civilians by detonating two bombs in a market area.

Although soldiers and policemen are filling the streets, the terrorists are too coward to face the troops and choose to massacre unarmed civilians instead. What are they trying to prove with these cowardly acts? They can’t defeat the troops, so they attack civilians to discredit the security plan. But I don’t think such attacks can change the course of events on the long term; the Baghdad plan is a strategic effort that will go on for months, and time doesn’t seem to be on the terrorists’ side right now.

Today there was fighting in the neighborhoods around us and there were several attacks in other parts of Baghdad. It looks like some militants consider that sitting back and waiting is not an option and so they are trying to break the siege. The fighting was fierce and gunship helicopters circled at low altitude over the fighting zone and adjacent areas. 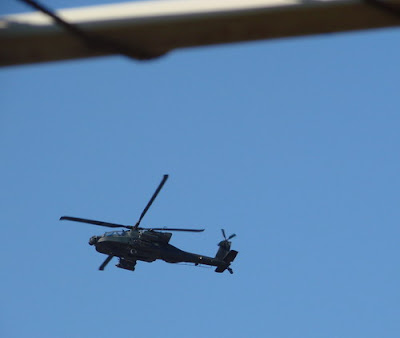 The sky of Baghdad is a story by itself—the city is being watched from above at several levels; from helicopters flying just above rooftops to various types of surveillance drones -which Baghdadis collectively refer to as “the fly” because of the buzzing sound- that remain in the air for hours, to another type of surveillance aircrafts that fly silently at higher altitudes and I suspect are also unmanned.
Above those flies an assortment of fighter jets, and sometimes heavy bombers.
All in all it’d be true to say that the sky is full of eyes and guns.

Although attacks happen here and there, the general feeling is still closer to hope and appreciation of the plan than pessimism. More families are returning to the homes they were once forced to leave, and we’re talking about some of the most dangerous districts such as Ghazaliya and Haifa Street.
Al-Sabah reports that yesterday alone 327 families returned home and that the scene of vans loaded with furniture of refugees leaving Baghdad is no more. There were times when the average was around 20 a day. The 327 figure brought the total to more than 500 families across Baghdad.

Al-Hurra TV aired a report on the story and interviewed some of the returning Baghdadis, one man said “those who returned earlier and saw the change in the situation called us and encouraged us to return, and I too will encourage the rest to come back”. The report showed those families asking the army to stay and not abandon their neighborhood, and showed the officer in charge giving his number to the locals so that they can contact him directly in case of emergency.

Looking at the relative increase in the number of attacks and their geographic extent one can expect the coming days to bring more escalation, but with the amount of power available for US and Iraqi troops I think the bad guys will not be able to achieve much.
Posted by Mohammed at 15:26