The politics of the lambs. 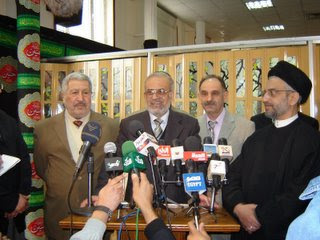 The process of forming the government here has slowed down and taken another shape; the latest meetings among the political leaders look much like meeting between tribal leaders when they try to solve a problem between their tribes.


The key is food! namely "Quzi" and "Teshreeb" and our politicians are doing a good job utilizing the effects of Quzi to push the talks forwards and reach agreements on issues that were viewed as tough obstacles…you know, people after a heavy meal of fatty lamb and rice tend to become soft and easier to convince.
Simply because a heavy fatty meal makes one try to avoid conversations that give headaches so people start looking for ending the conversation as few words as possible and perhaps-under heaviness and out of being polite to the host-even agree with things they weren't likely to agree with under normal conditions.

Also, it is part of our culture that sharing food and place strengthens the bonds among strangers and brings them closer together as if they were family.

So, it seems that feasts are going to be the shortcut that can help Iraq form a government in a shorter time than if without them.

Besides feasts, another suggestion was made to give every political trend a voice in the process.
The idea brought by Barzani-and some say by the US embassy-suggests establishing Majlis Ahl al-Hal wal Aqd which is basically a board or a "congress of the influential" where all political leaders meet to discuss different issues and work on finding solutions. This suggestion is to include even politicians who have not won seats in the parliament to avoid having any party feeling marginalized by the winning blocs.
This idea has been met by reservations from the UIA who in principal agreed to with the suggestion but with conditions like a) This congress has to be formed in accordance with the constitution, and b) Must not be able to overrule the parliament.

According to the prominent Kurdish politician Mahmoud Othman, this congress is still only a suggestion and will not necessarily become reality.
Anyway, it is interesting that for the first time we see the Accord Front, Iraqi list and Kurdish Alliance on one side while the UIA is standing alone on the other since the UIA is currently that only bloc that has reservations on this idea while all the rest expressed their support for it.

In my opinion, we should not expect any significant events before next Saturday because that's when the UIA is expected to announce their nominee for the PM position.
Until then…enjoy the smell of the lamb!

Thanks to Sooni for providing the photo.
Posted by Omar at 12:59