Yesterday I was doing a night shift at the hospital. After the night tour I went to the residents’ dining hall to have dinner. Many of my colleagues were there already. As I sat down, my eyes fell on an ugly seen. There was a picture just in front of me showing young Sadr, his father and the old Iraqi flag in the background. It has been very common since the end of the war to see pictures of She’at clerics everywhere. These are mainly of the late Sadr, Sistani and the late Mohammed Bakir Al-Hakeem and the youngest most famous idiot in the world, Muqtada Al-Sadr.

Lately the pictures of the fool have been disappearing and getting less and less visible everyday. Our hospital has few supporters of Sadr but these are -as expected- aggressive and fanatics, so no one dared to remove their pictures. My friends were discussing who would be the president in the transitional government and most of them agreed that Al-Pachachi was the best man for the job. The guy sitting next to me was a She’at who hates all clerics except Sadr! He thought that he was the least hypocrite of all. This guy however was funny and not a fanatic. I looked at him and said,

-Now how am I supposed to have my dinner with this person pointing at me!? Do you really think this is a picture that should be put in a cafeteria??

My friend smiled and said,

-Shh, lower your voice! I’m your friend but if some of his followers heard you say that, I really fear for your safety. I told you that they have instructions to kill anyone who talks badly of Sadr.

- I won’t lower my voice. All my life I had to lower my voice whenever I wanted to speak about Saddam. I couldn’t have the joy of at least tearing one of his pictures because of the chaos that followed the liberation. I want to tear this one.

- I promise you I won’t touch his fathers face or the old Iraqi flag, although I don’t like it. Besides I have the freedom to say my opinion in anyone.

-Yes, but what about your friends, the Americans, do they allow anyone to curse bush? Didn’t they hit Al-Rasheed hotel because of the picture of Bush the father was painted on the floor of the entrance? Another friend interfered.

-Are you serious!? And for your information many Americans hate Bush, and the Americans -even if they don’t like it- don’t prevent anyone from saying his opinion, and I want to scream in contempt and rejection for any tyrant and this fool is a tyrant project.

-Can you really swear at Bush? I don’t think so. My Shea’at friend said.

-Ok, just to show you that I fear no one and that we are free: S**T ON BUSH, S**T ON SADDAM AND S**T ON YOUR MUQTADA AL-SADR. I screamed as loud as I could.

Some of my friends laughed and others looked around to see if there was anyone of Sadr supporters there. They couldn’t believe what they heard.

-Ok, you say it’s freedom. Give us the freedom to post the pictures of the people we like, and so that you know, I only want it to stay here because they posted those pictures of Sistani and Al-Hakeem.

-Why don’t you like Sistani? I think he’s doing the right thing by staying calm.

-Yes, the right thing for himself.

-Himself and us. Do you really want to fight the Americans!?

-Are you kidding?? You know as I know as all these hypocrites, that no senior cleric will announce Jihad. I personally want to finish my study and offer my kids a good living, travel around the world and enjoy my life. I just support Muqtada because he showed the senior clerics as the hypocrites they are talking about “red lines” and such lies. Red lines my **s.

I laughed and agreed, and then I asked him,

-Will you accept it if I put the pictures of the people I like?

-Ok, I want to post a picture of GWB, Adnan Al-Pachachi, and Colin Powel.

-I’ll tear the picture of Bush if you put it but I promise you I won’t touch those of Powel or Al-Pachachi.

-Why is that? Where’s the freedom here!?

-I’m sorry but I hate GWB. I like Pachachi and Powel though.

I smiled and said,

-He is an honest man and I respect him a lot for fighting his way to where he is now without any help, and for his help to us, especially in cutting the debts down.

-That wasn’t exactly him, but he had an effort in that. So can I put his picture next to Sadr, although I think it’s an insult to the great man.

-No put it next to that one. My friend pointed towards a picture of Abdul Aziz Al-Hakeem the head of the SCIRI.

-Because he promised the Iranians that he would pay all the money we owe to Iran when he was the president of the GC.

Then my friend came with this idea of adding Saddam’s picture and writing a small line under each one, and here is how he thought it should be: 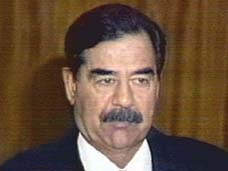 The man who drowned Iraq in debts.

The man who wants to save Iraq from drowning. 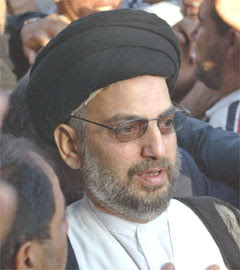 The man who also wants to save...Iran.