There hasn’t been any major security incidents in Baghdad since the attacks on three bridges in both its northern and southern suburbs on Friday May 11, more than a week ago. This doesn’t mean Baghdad is essentially calm: there are episodes -albeit minor and limited- still happening from time to time. They often go unreported, so there’s no information on whether they leave any casualties. Anyway, we do hear small blasts and bursts of machine guns a few times a day. In most cases it’s impossible to know whether those were raids by security forces or attacks by militants. 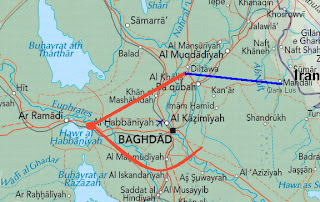 While there’s a decline in significant violence in the capital, there has been an increase in mortar and rocket attacks on the Green Zone as well as heavy attacks on other provinces, namely Diyala and Mosul. In Diyala the increase in violence is just relative, since the province and Baghdad were racing against each other in terms of violence. On the other hand, Mosul has recently been the scene of organized, large-scale attacks after months of relative calm. Mosul is luckier than Diyala, though, as the security forces have usually managed to repel the attacks and limit the losses.

The recurrence of terror attacks in the last few weeks has put a small town in Diyala at the forefront: Khalis. Northeast of Baghdad and the northwest of Baqubah, Khalis’ situation is somewhat similar that of Hibhib, a smaller town only a few miles from Khalis, one year ago. In the spring of 2006, Hibhib came under a series of repeated and concentrated terror attacks well above average in intensity and brutality, particularly after a string of beheadings. A few months later, in June 2006, Zarqawi was killed in an airstrike in Hibhib.


Similar incidents have been taking place recently in Khalis. The town suddenly registered more car bombs than any other in Iraq -in fact more than entire provinces-and last week teachers were ordered at gun point to shut down all the schools. That was only a few days after terrorists raided one school and beheaded two teachers, a man and a woman, in front of students and colleagues. In my opinion these attacks have the signature of the ‘mother cell,’ so to speak, and are very likely to be part of a slaughter and intimidation campaign in order to ‘prepare’ the town into becoming the new headquarters of al-Qaeda in Iraq or one of its main branches. I wouldn’t be surprised to hear that the chiefs of the network are present over there right now.

Disturbing reports are coming from another town in the Diyala province: last week, terrorists murdered more than a dozen civilians in a village near Mendili called Qara Lus, in a largely peaceful Kurdish area at the eastern end of the province. This poor town’s problem is that it lies on the shortest road between Khalis and the border through Baqubah, which turns it into a strategic crossing point into Iran and back.
Even more telling, Qara Lus is where, in May 2006, the Diyala police disrupted a weapons smuggling operation from Iran that included antiaircraft weapons.

Let’s go back to the attacks on bridges. Cutting the Diyala river bridges and another one in Taji was likely not an offensive but a defensive action meant to deny US and Iraqi troops quick access to the main terrorists’ strongholds. The same measure was used by the Republican Guard during the late stages of Operation Iraqi Freedom in April 2003. If I’m not mistaken, the same three bridges were blown up back then in an attempt to slow the progress of coalition troops towards Baghdad. The only difference I see now is that the troops’ movement is largely from the center fanning out in raids on Baghdad suburbs. The terrorists probably thought that cutting the bridges would prevent US troops, mostly concentrated in Baghdad, from reacting fast to incidents in areas across those bridges.

I’ve also been following the worrisome news about the three missing US soldiers —most likely kidnapped— and I have to say that I found some parallels with the kidnapping of two other soldiers in the same area last year: they all took place only days after the capture or killing of senior al-Qaeda leaders and the launch of major security operations. Last year, the two soldiers were kidnapped only a week after Zarqawi was killed and two days after the government launched Operation Forward Together in Baghdad; this time, there were also a few senior al-Qaeda commanders killed just two weeks ago. And although Operation Imposing Law is three months old, a new campaign is just starting in Diyala.

US commanders recently announced that 3,000 additional troops would be sent there to reinforce the units already there, and it looks like the kidnapping is an act of distraction or, rather, an attempt to force US commanders to redirect thousands of troops to a rescue mission, preventing the troop buildup in the region where the main bases of al-Qaeda are located. In other words, to keep pressure off the mother cells.
Identifying the actual main base of al-Qaeda isn’t easy to do. Looking at the two main routes of al-Qaeda and how the main strongholds around Baghdad are aligned, they suggest that the Fallujah area and its immediate surroundings still remain the main hub for terrorists.
Posted by Omar at 07:14