After being technically in progress for about over a week, Operation Imposing the Law officially started yesterday.

Al-Maliki who's been on a tour in the mid-southern region announced the beginning of the operation from Kerbala. This choice I think delivers two messages; first it looks that Maliki was trying to show that the plan is solid enough and could go on without his immediate supervision and presence in Baghdad and that the military commanders are operating without interference from politicians. And second I think he wanted to say that even though the focus has been in Baghdad for months, the situation elsewhere was not ignored; and this part could be seen in the tough-worded warnings he made to local officials and militants alike.

First he gave militants in Kerbala 48 hours to disarm or face the consequences and then turned to the local officials and told them if they couldn't do their job right they'd better step down and let someone better take their place.

The Kerbala provincial administration's reputation isn't quite impressive when it comes to corruption and involvement in violence and Maliki didn't forget to give a stern warning against corruption calling corruption a crime just as serious as terrorism.

Back in Baghdad the most significant raid conducted yesterday was the one on Buratha mosque, one of the most important Shia mosques in Baghdad which is also considered a SCIRI territory.
The raid ended without blood but the preacher of the mosque, a lawmaker from the SCIRI, expressed his dismay about the raid "because it was American soldiers who searched the mosque" and this seems to be one of the changes in rules of engagement. I recall that there was some kind of a rule that said only Iraqi soldiers or police were allowed to walk into places of worship while American troops would have to stay outside.
This raid too is of political significance as it can be used to prove to that the operation is impartial and not directed against one sect without the other.

On the streets, checkpoints and roadblocks are becoming increasingly serious and strict in doing their job; soldiers and policemen are sparing no vehicles or convoys from searching and I personally saw a case yesterday where an ambulance driver tried to rush his vehicle through a checkpoint but the soldiers ordered him to stop and let him pass only after they checked the inside of the vehicle finding only a civilian medical emergency.
Strict checkpoints always mean slow traffic and inconvenient delays for Baghdadis but this downside is welcome when these security measures make the streets safer.

Despite the traffic jams and though this is the largest deployment for troops in the capital, daily life and civilian activity-contrary to what was expected-still continues at a rather normal level, unlike previous crackdowns where life came to near paralysis. 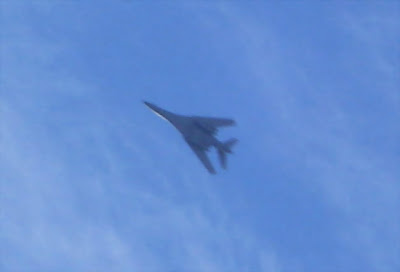 Meanwhile a new bird appeared in the sky; not exactly new but one that's been absent for a long time; since the end of major operations in 2003.
In fact this is the first time ever that I see the B-1 flying over Baghdad. Since Tuesday, the long-range huge bomber appeared several times over the city spending as long as 75 minutes in some cases. Unfortunately with only 3x zoom this is the closest I could get.
Posted by Omar at 08:02

I will be your frequent visitor, that's for sure.