Reconciliation in Iraq; the present and a different approach.

First of all we must keep in mind that there is no such thing as reconciliation in the way it's being portrayed by PM Maliki or President Talabani and I think 'settlement ' or 'compromise' would be better words to describe the kind of effort that would've been appropriate considering the status quo in Iraq.

The core point here is that no reconciliation is needed between the different factions of the Iraqi populace which means the initiative so far is not addressing the people and groups that are behind the violence.

I think it has been made clear that there are certain factions that have no interest in building peace in Iraq and are doing all they can to destabilize the country and ruin the democratic project in Iraq. It has been made clear by those particular factions whom were now used to see respond with escalation whenever a call for calm is made.

Of course such factions are funded and directed by powers in other countries that have their own agendas for Iraq that have nothing to do with Iraq's national goals.
So in this case a solution for Iraq's security problems which arise from the criminal activities of foreign-sponsored armed groups must take the form of a political deal with these regional sponsors who should be persuaded or threatened to accept such a deal, so the government can probably try to figure out what these powers and countries want from Iraq and bargain to convince these powers to end their support for the local troublemakers in return for some of what they want from Iraq or better, in return for Iraq not interfering with their business.

The outcome depends here on how well a deal our negotiators can cut. That means there are no guarantees but it's better to give that a shot that to keep looking for something in a place where that thing never existed.

Perhaps President Talabani's latest warning to Iraq's neighbors falls in this category of bargaining and is a good first step in this direction but words need to be reinforced with action in order to provide leverage, so Talabani and Maliki are expected now to keep the momentum of this warning charged.

Maliki and Talabani should concentrate their efforts in this direction especially that what had been done and achieved with Maliki's original plan of reconciliation does not rise to the level of expectations and does not match the noise made in the local media about it.
There's no clear work plan or guidelines. The entire thing looks arbitrary and many of the people who took part in the latest big conferences where PM Maliki spoke to civil society organizations and community leaders have had the same impression. 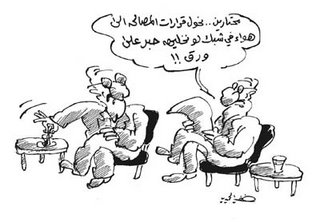 We're confused, should we turn the reconciliation decisions into 'winds in nets' or keep them as ink on paper?
(Courtesy of Iraqi cartoonist Khudair al-Himyari/New Sabah)

The search for a solution should start from the back corridors of the parliament and should go side by side with efforts to put pressure on, and negotiate compromise with, the countries that are meddling with Iraq's affairs.
This is of course going to take extraordinary efforts from the leaders who care about Iraq and who put Iraq's welfare on top of their priority lists and will require great assistance from the US especially when it comes to dealing and negotiating with leaders of Iraq's neighboring countries.

In my opinion, political and sectarian violence does not reflect internal problems as much as it reflects symptoms of the problem which is the interference of regional powers in Iraq's affairs and their desires to gain a foothold in Iraq and stop democracy from spreading further in the region.
This means reaching deals with the pawns of these powers is not enough a measure to solve the problem because pawns are replaceable and pacifying one local violent faction will only mean that those who were pulling its strings will look for a new pawn to continue the mission.

Sometimes history, even that of dark eras where evil men ruled, can provide some examples that we probably can learn from…
In one of the previous sessions of the Anfal trial Saddam spoke about how the Kurdish rebellion surrendered immediately after he signed a treaty with the Shah of Iran back in 1975…"120 thousand weapons were turned in, in a matter of days…"

For long years before 1975, it was considered next to impossible for the Iraqi military to crush the rebellion, and no political resolution could have been reached between the rebels and the central government but a paper signed by two men was enough to put an end, for some time at least, to that confrontation.
Posted by Omar at 07:57