Al-Maliki explained that Zarqawi (and 7 of his aides) was killed in an air raid in the little town of Hibhib 8 km north of Baquba after receiving tips from residents in the area.

General Casey says more details on the operation will be available in a briefing at 3 pm local time. General Casey mentioned that Zarqawi's identity was confirmed through his fingerprints.

Hibhib is a small town several kilometers to the northwest of Baquba and most of its people are from the Azzawi tribes.
This small town was traditionally nicknamed Um al-Arak as it was famous for producing some of the finest Arak in Iraq, an industry that flourished in the area for the abundance of date palms. It's even said that Hibhib's Arak can make the fox get drunk! 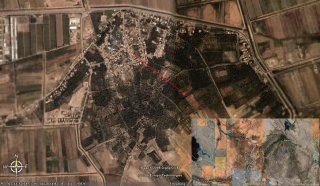 Of course that was before the Salafi Zarqawi tide reached this once peaceful town.
It was quite visible lately that Hibhib became a place for intense terror activity, especially after the phenomenon of severed heads appeared. Severed heads of civilian Iraqis were found twice in fruit boxes in and around Hibhib; a terrible crime that shocked Iraqis.
Also a few days ago 19 passengers, mostly students were murdered in cold blood just north of Hibhib which indicated that a seriously bloody terror cell was in this area.

There had been several reports about Zarqawi fleeing Anbar to Diyala after the tribes in Ramadi turned against al-Qaeda but obviously, Diyala and its suburbs and Iraqi tribes were not willing to endorse the head chopping criminal.

In the first official confirmation, PM al-Maliki said that Jordan has provided intelligence that was used in the raid on Zaraqwi's hiding place but he also stressed that tips from locals were the primary lead to Zarqawi's exact location and these were the information according to which the missiles were guided.

Al-Maliki said that among the 7 killed with Zarqawi were two women who were responsible for collecting intelligence for the al-Qaeda HQ cell.
Posted by Omar at 03:45

All pizza places of USA http://pizza-us.com/florida/Tampa/Pizzaiolo%20Bavaro/33602/

It was many years ago we first selected Top Restaurants in the U.S. See it. http://restaurants-us.com/in/South%20Bend/Locos%20Mexican%20Restaurant/46619/