Heat, toothache and a birds cage...

I was lacking the energy to post anything new in the last couple of days; partly because of the increasing heat (around 40c in the shade) which makes one look and behave like a sleepy aging alligator and partly because I'm having an annoying toothache that's been attacking every other hour since last Saturday (now don't laugh. Just because I'm a dentist it doesn't mean that my teeth should be perfect!) Anyway, it's an old amalgam restoration that I have in a molar since 1995 and now it apparently started to leak or something so it's time to replace it with porcelain filling.
Now enough whining for me.

Al-Iraqia TV announced that its transmission will be extended to cover the western hemisphere of the globe, so anyone who has a satellite dish will be able to watch Al-Iraqia by entering the following values:
IntelSat 5
97 degrees west
Polarization vertical
12,146 Mhz and symbol rate 22.
This is going to be good news for hundreds of thousands of Iraqis who live in the American continents.

Finally I have this photo for you. It's the 1st photo taken with a phone cam I post here. I like the way nature and space are being utilized and preserved here. 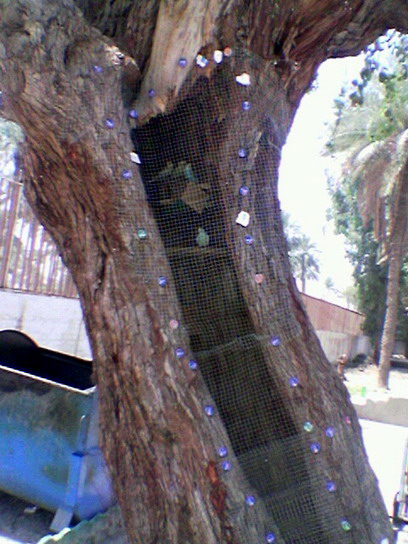 More interesting; the tree is still alive!
By the way, I intend to depend more on the phone cam for blogging from now on as it's kind of easier and safer to use in a place like Baghdad especially that I don't have the credentials that regular media reporters are provided with.
Posted by Omar at 06:03